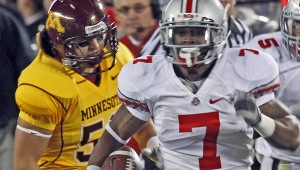 Ohio State’s Jordan Hall (7) runs back a kick return against Minnesota during a game last season in Minnesota. Hall is one of the running back candidates to fill in for suspended Daniel Herron. (The Ironton Tribune / MCT Direct Photos)

COLUMBUS — Terrelle Pryor’s replacement as the starting quarterback at Ohio State is the No. 1 question of fall camp.

But a close second? How about this: Who will he hand the ball to?

The role of tailback could be even greater in the absence of Pryor, who left after his junior season amid a suspension for NCAA violations, because the Buckeyes might rely heavily early on the running game to protect their relatively inexperienced signal callers.

Come midseason, the Buckeyes should be all set. In October, senior Daniel Herron, who is among the four players serving a five-game, NCAA-mandated suspension to start the year, will be back. He had 216 carries, 1,196 yards and 16 touchdowns in 2010.

“We don’t know who is going to play,” Hyde said. “Every day is like pressure. Someone is getting better, so that makes you want to get better.”

Coach Luke Fickell could go with a committee system, especially in the opener, Sept. 3 vs. Akron.

“You never know,” he said. “There’s a bunch of them. That’s one of the tougher positions I think on the field because it’s the one position that takes the most hits. A guy’s got to keep on getting up and keep on coming back after it and wearing people out.”

The returning quarterbacks are not exactly brimming with experience, either.

Put it all together, and Berry and Co. will be prepared for a heavy workload vs. the Zips.

“I think that’s going to be the deal,” he said. “We’re all working hard and play the reps like it’s game situations. I think we’ll be ready to open the season running the ball.”

Having the running backs catch the football could also be a big part of the game plan until the quarterbacks get comfortable. Hall and Hyde are particularly effective in the slot because of their speed.

“They’re just trying to get the ball around,” Hyde said. “We have good running backs that can catch. It’s good they’re using us at wideout to catch the ball. It works out.”

Putting multiple backs in the game would add another dimension to the offense, as well.

“It’s going to be fun this year,” Berry said, “to see what we do with all these talented backs.”

Nationals rally to down Reds 6-4

The Associated Press WASHINGTON — The Cincinnati Reds got off to a fast start Tuesday night. It just fell apart... read more