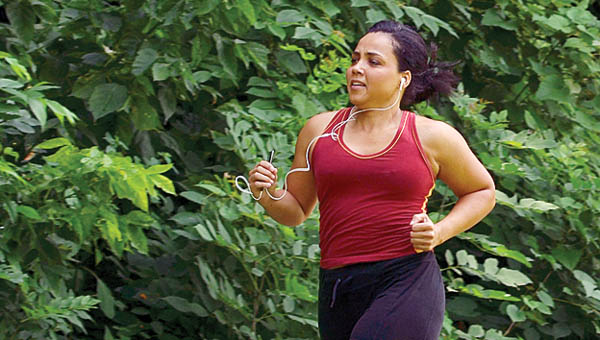 On Sunday Mitzi Sinnott will find out how far a month’s worth of training will get her.

That’s when she joins 2,500 other athletes in the Iron Girl Triathlon in Columbia, Md., for a marathon of swimming, biking and running. Sinnott, dancer, actress and playwright, is joining the fray for health reasons. Not her own, but for the health of thousands of women in the United States who are armed services veterans and homeless.

Drawing attention to homeless women’s vets is the cause she has chosen to dedicate Sunday’s event to and that’s how she approached the organizers of the triathlon when she found out she had missed the cutoff to participate.

“I thought I should do it for the ladies who are veterans,” Sinnott said. “When it was closed, I about died.”

That’s when she contacted the director of the event, writing, “I know it is closed, but I’m hoping you can make room for one person and one very big cause because together we can bring awareness.”

That letter got her into her first triathlon.

Sinnott understands the trauma of the returning veteran to civilian life. Her own father suffered post-traumatic stress syndrome following his tour of duty in the Vietnam War.

“The families are also the ones who are damaged,” she said. “It is never just the soldier. The shrapnel resounds through the family.”

So much was Sinnott affected by the trauma of war and the plight of the returning vet, that she created a one-woman show, “Snapshot,” that she likes to describe as “a true story about love interrupted by invasion.”

Besides university campuses across the country, Sinnott has performed her multidisciplinary show at the Cape Town Festival in South Africa and the International European Women’s Theatre Festival in Finland.

Sinnott, who grew up in Ironton, studied dance first with her mother, Yvonne DeKay, before continuing her work at the Alvin Ailey American Dance Theater in New York City. While in New York, Sinnott was the director of School of the Future’s Extended Day Program in Manhattan, developing arts-based after school programs.

Since she made her decision to participate in the Iron Girl, she has followed a strict regimen of training, doing at least two of the three events each day. But despite her training, she admits to moments of trepidation as the day nears.

What she will be expected to accomplish is a .62-mile swim in Centennial Lake at Ellicott City, Md., followed by 17.5-mile bike ride. Then she will jump off her bike and head into a 3.32-mile run through Centennial Park.

“The running will be a challenge for me,” she said. “I don’t run endurance.”

The rest not so much.

“I have been a swimmer my whole life,” Sinnott said. “Swimming is really energizing in my whole body. It makes me feel lighter.”

What keeps her going is more than the adrenalin rush of meeting physical goals. It’s the positive feedback she has gotten so far from veterans who learn what she is doing and why.

Councilman: Ordinance can be enforced

Official disputes attorneys’ ruling on vendor law The sponsor of an ordinance recently passed by the Ironton City Council to... read more