Reds use a little luck to close down win against Nationals 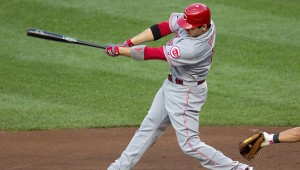 WASHINGTON — Johnny Cueto and the Cincinnati Reds completely shut down the Washington Nationals for eight innings. In the ninth, they used a little luck to close out the win.

Cueto pitched eight scoreless innings and Francisco Cordero got a double play to get out of a bases-loaded jam and end the 2-1 victory Wednesday night.

“We were fortunate to get that one,” Reds manager Dusty Baker said. “We squeaked that one out big time.”

Cincinnati took a 2-0 lead into the bottom of the ninth, as Cueto (9-5) aimed for his second shutout of the season. Instead, Ryan Zimmerman homered on his first pitch of the inning and Baker turned to Cordero.

“That was the play that saved the game,” said Cordero, who earned his 24th save. “Any other stuff happens there, the game is tied. It was the best thing that could happen tonight, and it happened.”

The Nationals’ rally nearly erased Cueto’s tremendous performance. The right-hander allowed six hits, struck out five and did not walk a batter.

Cueto showed right away he had good stuff, striking out the first three batters. He lowered his ERA to 1.89, which leads the majors after the outing gave him enough innings to officially qualify.

Baker even kept him in to bat in the eighth inning with the bases loaded and two outs.

“Johnny Cueto threw a heck of a ballgame,” Baker said. “We were hoping that possibly he could shut them out and go the distance, but that home run by Zimmerman kind of negated that.”

Washington had runners reach third base in the second and fourth innings, but each time Cueto easily got out of the jam.

“In the bullpen warming up, I felt really, really good today,” Cueto said. “My main thing was location. I was locating the pitches where I wanted, except the one (Zimmerman) hit out. The ball was supposed to go outside, and it landed in the middle.”

Ross Detwiler (1-3) pitched six innings, his longest outing of the season. He allowed one run and seven hits while striking out a career-high seven and walking two.

The only blemish for Detwiler was Joey Votto’s 20th home run with two outs in the first inning on a fastball that stayed up.

“Looking at it now, throw anything but what I threw there, and hopefully he doesn’t hit it out,” Detwiler said.

Cincinnati posed a scoring threat in the third when the Reds loaded the bases with one out before Detwiler struck out Jay Bruce and Miguel Cairo hit a fly ball to shallow right field to end the inning.

The Reds picked up an insurance run in the eighth. They had a chance to score more but left the bases loaded.

Consecutive singles by Votto and Bruce against reliever Sean Burnett put runners on the corners with no outs. Cairo grounded sharply up the middle, and Burnett snagged it and threw to third to catch Votto, who had started for home on the play. Another walk by Burnett loaded the bases.

Ryan Mattheus replaced Burnett, and Ramon Hernandez hit a grounder up the middle that was fielded by shortstop Ian Desmond. A slight slip when Desmond fielded the ball left him unable to turn a double play, but he did throw out Hernandez while Bruce scored.

Another walk by Mattheus loaded the bases for Cueto, who grounded to second to end the inning.

NOTES: Nationals RHP Steven Strasburg, who had Tommy John surgery last year, made his third minor-league rehab start for Class A Hagerstown. Nationals manager Davey Johnson said Strasburg may eventually replace RHP Jordan Zimmermann, who has an innings cap this season because of his 2009 Tommy John surgery. Johnson said Zimmermann likely has three more starts, and the manager speculated Strasburg may fill his spot on Sept. 2. … Desmond batted leadoff for the first time since April 14. … Phillips led off for the first time this season. … Zimmermann (7-10) starts Thursday against Reds RHP Bronson Arroyo (7-9) in the final game of the series.