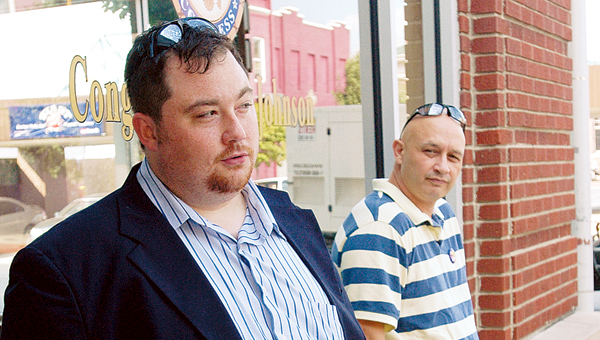 They were small in number but they wanted to send a big message to U.S. Rep. Bill Johnson: We need jobs.

Two representatives from the West Virginia, Kentucky district of Ohio Service Employees International Union were in Ironton Thursday morning to protest in front of Johnson’s Park Avenue office, which happened to be closed.

Anthony Caldwell, media relations liaison for the agency, said he is angry that Johnson has not done enough to create jobs in the community.

“Bill Johnson is absent when it comes to jobs in this community,” Caldwell said.

Caldwell criticized the congressman for not coming to the aid of southern Ohio workers who lost their jobs when officials decided to close the Ohio River Valley Juvenile Correctional Facility in Scioto County.

“There’s no replacement for those jobs,” Caldwell said. “Those are good-paying jobs”

People are starting to lose hope and they don’t think their elected officials are there for them, Caldwell said.

The people must hold their elected officials accountable, he said.

Johnson has not sponsored one bill to create jobs, Caldwell argued.

Caldwell said he was expecting more protesters. As it was, only he and Ashland resident Dana Samson, an employee of King’s Daughters Medical Center showed up. Caldwell said the number did not matter.

Samson said Johnson has an agenda for no jobs.

Mike Smullen, a spokesperson for Johnson’s office, said the office was closed Thursday as the office worker was “in the field.”

If Johnson had been there, Caldwell said he would have told him that the first thing he should do when Congress gets back to work is figure out how to create jobs.

Johnson issued a statement saying that job creation is one of his top priorities. He blamed the Obama administration for “roadblocks” to creating jobs in southern Ohio and around the nation.

“I have sponsored and co-sponsored numerous pieces of legislation passed by the House of Representatives designed to spur job growth, only to see the Democrat-controlled Senate refuse to consider them,” the statement said. “But, I will not give up the fight, and will be relentless on this issue. I am working hard to create an environment where job creators can gain the confidence to start and expand their businesses in order to put Ohioans back to work.

“I am engaged with economic development organizations throughout the 6th District working to connect businesses with opportunities. I will continue to fight to lower taxes on American families and small businesses and fight the burdensome regulations so that businesses will have the confidence and incentive to begin expanding and hiring. And, I will continue the fight for a balanced budget amendment to our Constitution that will require Washington to learn to live within its means, just like the hard working families of Ohio’s 6th District have to do every day.”