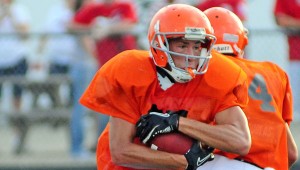 Coaches always say injuries are part of the game.

They just aren’t a good part of the game.

Injuries are inevitable in football, but they can have a greater impact at the high school level, especially the smaller schools where depth — or the lack of it — is a key factor.

Case in point was the injury of Ironton junior running back Dion Brown early in Friday’s scrimmage at Coal Grove. Brown wasn’t sure what happened, but he told Ironton coach Bob Lutz his shoulder was hurting.

After a check by team trainer David Coburn of Tri-State Rehab, it was determined that the team’s starting halfback had a broken collarbone and would be lost from four to six weeks.

“I hate that for Dion. He’s a pretty tough kid. He’s just had a lot of bad luck with injuries,” said Lutz. “He’s worked hard to get back this year and he was playing well. We just have to make some adjustments and move on until he’s healthy.”

Injuries not only put a player on the sidelines, but it creates a domino effect. With Brown on the sidelines, that forces Patrick Lewis into a starting role. It also means another running back may move to a different spot.

“We’ll take a look at it and see what we can do. We have to move on. No one is going to feel sorry for us, but you do feel for Dion,” said Lutz.

Fairland coach Dave Carroll is well aware of what injuries can do to a team.

Last season the Dragons lost wide receiver Cody Midkiff on the third play of the first game with a broken leg. He did not return.

But there was more. Tailback Eric Riley went down with an injury and Carroll was forced to improvise with quarterback Chad Fisher, moving him back and forth from tailback to quarterback.

“When you don’t have a lot of older players, you’re limited to who can step in and play. The young kids aren’t ready mentally and physically,” said Carroll.

“We did what we could do. And Chad got hurt later on and he played beat up the last part of the season. When you’re at a smaller school, you don’t have the number of athletes that a Division I or Division II school has. Your options are limited.”

Coal Grove suffered an injury to linebacker Greg Bender last season and played without him in the final regular season game and their playoff game against Oak Hill.

“We didn’t have Bender that last game against Chesapeake. He’s the guy we count on to stop teams in the middle,” said Hornets’ coach Dave Lucas.

The previous season, the Hornets were going in for a touchdown in a playoff game at Oak Hill when quarterback Evan Ferguson broke his wrist and missed virtually the entire game.

“Losing Evan not only meant we lost our offensive leader on the field, but it changed our entire offensive game approach. We became one-dimensional and that made it a lot easier for Oak Hill’s defense,” said Lucas.

Coburn — who was Brown’s physical therapist at Ironton Physical Therapy — said some injuries are preventable, but there is no way to keep any team injury-free.

“Dion worked hard to get back in shape. He’s had two major surgeries in two years. He’s done all the necessary work to be in shape. It was just a freak thing and a tough break for him,” said Coburn.