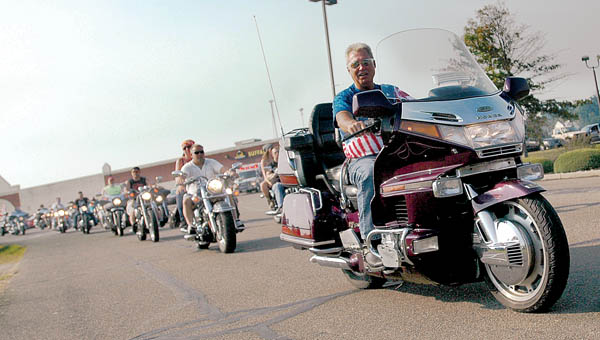 Bob Blankenship is seen making his way out of the Ironton Hills Shopping Center as he and many others participate in the Parade of Heroes Saturday at the annual Rally on the River event.

By late Saturday afternoon, the roar of motorcycle engines, rivaled only by the sounds of rock music, resounded through the streets of downtown Ironton. A sea of people and bikes covered the Depot Square area of town.

It could only mean one thing: The Rally is back.

The eighth annual Rally on the River is expected to have drawn between 40,000 and 50,000 bike enthusiasts to the city. The four-day event is hosted by grassroots civic organization the Friends of Ironton.

The bikers came from all over.

Rick Corbus and Chad Hutchison of Athens made the two-hour ride to Ironton together. Corbus came last year.

Hutchison came to the bike festival for the first time this year.

“I think it’s pretty awesome, definitely,” Hutchison said. “I’ll definitely come back next year from what I can see. It looks like we’ll keep busy all day long.”

Other Rally-goers, like Rowdy Osborne of Greenup, Ky., did not have as long a drive. This was the fourth visit to the Rally for Osborne, a member of a motorcycle club, said.

“I like all of it,” Osborne said. “I’m just fascinated with motorcycles.”

“It seems like all the people are friendlier here,” he said.

The Friends of Ironton use the proceeds from the event toward projects like the new Splash Park, bulletproof vests for Ironton police officers and the restoration of the historic Ro-Na Theater.

This year’s event has been at the center of discussion and controversy for weeks after the Ironton City Council passed a law requiring all vendors who set up in the city during special events to pay the host organization a vending fee.

The council did so at the request of the Friends of Ironton, who argued that the vendors who benefit from being near their event should contribute money to help pay for the approximately $200,000 event.

At first the city’s solicitors said the ordinance was not enforceable but a second legal opinion said that the rule could be enforced.

Ironton Police Chief Jim Carey said Saturday his department had addressed two vendors who had not paid the vendors fees. One vendor complied but the other did not, Carey said.

“We didn’t have too much trouble,” Carey said.

As for the vendors themselves, feelings about the new ordinance varied.

Josh Wheeler from CJT’s Embroidery & Screen of Coal Grove ran an airbrushing booth during the event. Wheeler said he supports the new ordinance. Those who set up outside the Rally grounds without paying the fee affect his business, he said.

Wheeler’s business has sold the official t-shirts for the bike festival since its inception, but this is the first time it has set up the airbrushing booth.

Wheeler said business had been better than he expected. He had been warned that bikers wouldn’t buy the white t-shirts with airbrushing that he sold. While that may be true, many of the bikers bought items for their grandchildren, Wheeler said.

“I can’t complain at all,” he said. “It’s been pretty good for a short event.”

Near Wheeler’s booth was Mike Weise of Mike’s Magnetics. He came for New Smyrna, Fla., to sell his hand-crafted magnetic jewelry. Weise has been to the Rally before and says what goes on outside the event has little effect on how his business does.

“Very rarely do I see people in organizations that will let people do that,” Weise said of outside vendors setting up without paying.

Weise said Rally on the River is one of the better motorcycle events he goes to because of the amount of people that walk through town.

“If I was in California and I had to drive to this town for the weekend, I would do it,” he said.

This year a change in the Rally set up meant that bikes were kept separate from the vendors’ area. Bikers could no longer ride through the area as they had in the past. Weise said it gave the event a county-fair feel. Weise feared the new set-up meant a slightly smaller crowd. Still, the amount of people that come is phenomenal, he said.

“I wouldn’t miss this for anything,” Weise said.

Bert Collins came as a part of an LED motorcycle lighting business from Hollywood, Fla. Collins said he wasn’t threatened by any business that sold similar products outside the rally grounds.

“Honestly, any other light vendor is not a threat,” he said. “We all ride, so we can relate to what you want when you bring the bike to us. I think that makes a big difference.”

Only two of those who filed to run in the upcoming general election won’t be on the November ballot. On... read more