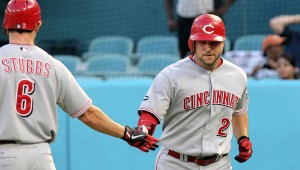 Cincinnati Reds’ Yonder Alonso, right, is congratulated by Drew Stubbs after hitting a home run against the Florida Marlins during second-inning action in Florida on Tuesday. Alonso had four RBIs in an 8-6 win. (The Ironton Tribune / MCT Direct)

MIAMI (AP) — There’s no place like home. Reds manager Dusty Baker is a firm believer in that.

Making his first start at first base for Cincinnait this season, Yonder Alonso took full advantage of the opportunity to play in front of more than 200 friends and family members Tuesday night. It was his first trip as a big leaguer back to his hometown, where he also played college ball at the University of Miami.

Alonso homered and drove in four runs, including a tiebreaking double in the ninth inning that sent the Reds to an 8-6 victory over the fading Florida Marlins.

“That’s why he was out there,” Baker said. “I told him he was going to play in front of his family. Usually guys play well in front of their families.”

Alonso hit a solo homer, his second, in the second inning and had an RBI single in the third. He finished with three hits.

“It’s funny because I went to dinner with my parents (Monday) and my mom told me that, ’I have a feeling that you’re going to have such a good game’ and she’s right about a lot of things,” Alonso said. “She doesn’t say that too often so when she does say it I guess she blessed me.”

Dave Sappelt tied the game at 6 with a two-run double and the Reds scored four times in the ninth off closer Leo Nunez (1-4), who blew his sixth save in 39 chances. They were the first career RBIs for Sappelt, who had three hits.

“When they’re beating me with breaking balls, now you’re in a titanic struggle. But since they were just beating me with fastballs it was just one of them things where I’d eventually come out of it,” Sappelt said.

Jay Bruce hit his 27th home run for the Reds.

Emilio Bonifacio homered and drove in three for the Marlins, who have lost six in a row. They are 2-16 in their last 18 games.

“We had a meeting (before the game) and the guys played extremely well,” Marlins manager Jack McKeon said. “I thought they were alive, there was some energy on the bench, guys were really pulling to pull this off. It looked like we had it, and then it went away.”

With the Reds trailing 6-4 going into the ninth, Joey Votto walked and Brandon Phillips singled. Sappelt then laced a double to left field, scoring both runners. Three batters later, Alonso lined a two-run double to center.

“That’s a huge boost for the whole team,” Alonso said. “You’re facing the closer, meaning that’s your best guy in the bullpen. It’s definitely very satisfying for us to do that.”

Aroldis Chapman (3-1) picked up the win, striking out the only batter he faced. Francisco Cordero pitched a scoreless ninth to earn his 27th save in 32 chances.

Marlins starter Ricky Nolasco struck out eight to move past Dontrelle Willis, now pitching for the Reds, to become the club’s career strikeout leader with 765.

“It won’t sink in now,” Nolasco said. “Everybody’s frustrated. Personal goals aren’t going to mean anything right now when the team is scuffling like this.”

“He never really settled in,” Baker said. “He was in trouble all of the time. That’s not like Johnny to walk people. He struggled, but he kept us close enough for us to come back and win the game.”

NOTES: Nolasco has 127 strikeouts this season. … Bonifacio’s only other multi-RBI game came against the Reds on May 1 when he also drove in three. … Cordero recorded his 200th save in the National League. … After the game, the Marlins recalled OF Logan Morrison from Triple-A New Orleans and designated OF Dewayne Wise for assignment. … Willis, who played five seasons with the Marlins (2003-07), received a generous ovation from the crowd when he was chosen to change the Sun Life Stadium game countdown after the fifth inning. The Marlins have 14 games remaining at Sun Life before moving to the new Marlins Ballpark next season. … The teams will play a doubleheader on Wednesday in attempt to avoid potential inclement weather due to Hurricane Irene. Homer Bailey and Bronson Arroyo will pitch for the Reds and the Marlins will counter with Javier Vazquez and Chris Volstad. Bailey is 4-1 in his last five decisions and Arroyo will be looking for his first career win against the Marlins. He’s 0-3 in 10 games, seven starts. For the Marlins, Vazquez is 4-1 against the Reds since 2003 and Volstad is 0-2 with a 6.55 ERA in two starts since being recalled from Triple-A New Orleans.

The Associated Press CINCINNATI — Safety Taylor Mays is getting a chance to start over with a team that’s been... read more