BURLINGTON — Ohio American Water is conducting an extensive overhaul of its water tank at the Burlington Commons Park. 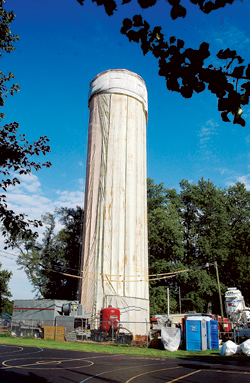 The Burlington water tank, located at the Burlington Commons Park, is currently undergoing an overhaul. A canvas covers the tank which will be worked on throughout September. THE TRIBUNE/JESSICA ST JAMES

“It has not had an overhaul,” Ron Dials, operations superintendent at the South Point office of Ohio American, said. “It was built in 1950 by the county commissioners until they sold it to Ohio American. Since then we have done some work on it.”

“They are covering it with canvas,” Dials said. “They have to capture the chips.”

Workers are also redoing the entrance hatches and the ladders leading to them. The tank will be repainted robin’s egg blue and bear the word, “Burlington,” across the front.

The project will last for about another month. Work is being done by outside contractors, American Suncraft, out of Dayton.

Total cost for the project, including inspections and engineering costs, is expected to be at $300,000.

Mayor to meet with ODOT director