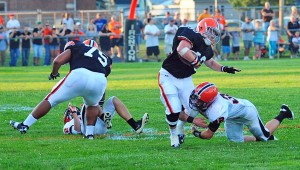 Ironton Fighting Tigers’ running back Tyler Hager slips a tackle and gets a block from Dakota Taylor as he gains some of his 152 yards in a 42-13 season-opening win over the Wheelersburg Pirates on Friday night before a standing room only crowd a Tanks Memorial Stadium. (The Ironton Tribune / Tony Shotsky of Southern Ohio Sports Photos.com)

Ironton knew enough about the Wheelersburg Pirates to turn the annual tough rivalry game into a one-sided affair as the Fighting Tigers won 42-13 in a dominating performance before a standing room only crowd at Tanks Memorial Stadium on Friday.

Ironton won 12-7 last season but the Pirates lost 18 seniors and coach Bob Lutz was very much aware of Wheelersburg’s shortcomings.

“We knew they lost a lot from last year. They had a lot of new guys and young guys,” said Lutz. “ We did a good job up front. We changed some blocking schemes and we were able to wear them down.

“Any way you win the first one is good.”

Speaking of good, running back Tyler Hager ran 20 times for 152 yards and two touchdowns as Ironton racked up 383 total yards including 352 on the ground.

Ironton also dominated the time of possession, running 72 plays — 66 on the ground — to 34 for the Pirates.

“For the first game I thought we played awesome,” said Hager. “They changed up from what we expected. They came out with smaller, quicker guys up front. The line did a great job and the backs worked together.”

The offense wasn’t the only part of the Ironton game that dominated. The defense limited the Pirates to 139 total yards and only 31 over the first three quarters when they ran 22 of their plays including two in the third quarter.

Pirates’ quarterback Alex Shears wanted to file harassment charges against the Ironton defense led by lineman Nick Culbertson. Shears was 7 of 14 for 67 yards and an interception but just 3 of 9 for 15 yards and a pick against the first team. He ran eight times for 8 yards.

“We just tried to contain him. We just wanted to keep him in the pocket. It was like we did against (Brandon) Schankweiler last year,” said Culbertson.

Lutz said the defensive pressure was a key factor.

“We got good pressure on the quarterback and made him move around. Culbertson at defensive tackle makes a difference,” said Lutz.

After a three-and-out by the Pirates to start the game, Ironton drove to the Wheelersburg 7 only to be stopped on downs.

The defense held again and a 13-yard punt return by Tyler Kratzenberg put Ironton at the Pirates’ 24. Although they lost 3 yards on first down, Trevor White broke loose on a 27-yard scoring run and it was 6-0 on the first play of the second quarter.

Shears’ 59-yard punt put Ironton back at the 8, but the Fighting Tigers went on a 9-play drive capped by Hager’s 43-yard scoring run.

A shanked punt had Ironton at the Pirates’ 44 and White scored four plays later from 22 yards out and it was 18-0.

Tanner Dutey came up with an interception and ran it back 25 yards to the Pirates’ 23. Four plays later Hager ran 1-yard to score with 28 seconds left in the half. Steve Sisler’s kick put the lead at 25-0.

“That’s a tough game to start with,” said Pirates’ coach Rob Woodward. “They’re strong and physical and we’re a bunch of sophomores out there.”

Jake Rawlins hit a punt that Ironton downed inside the 1-yard line in the third quarter after a drive stalled thanks to a 15-yard penalty.

Wheelersburg ran just two plays in the quarter, the second a safety as Schylar Fields tackled Shears in the end zone for a safety and a 27-0 lead.

Ironton’s backups played most of the third quarter and all of the fourth quarter. Dutey scored on a 1-yard run and Patrick Lewis went 7 yards for a score.

The Pirates avoided the shutout on a 2-yard run by Mark O’Brien with 5:42 left. Backup quarterback Eddie Mille threw a 13-yard scoring pass to Dylan Miller with 38 seconds to play.