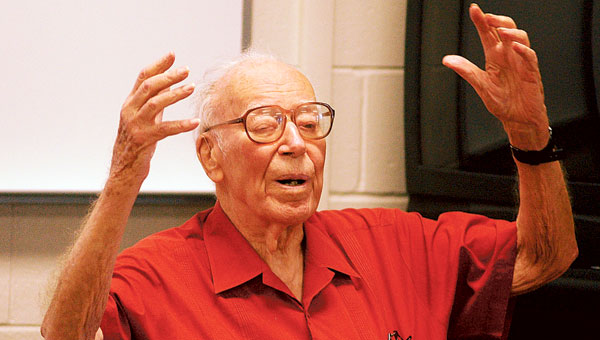 COAL GROVE —From interrogating high-ranking Nazis to planning the first moon landing and marching with Dr. Martin Luther King Jr., you could say Ken Hechler has seen and done it all.

Friday, students at Dawson-Bryant High School had the opportunity to ask questions of the man who not only lived through the eras of history they are learning about in school, but who also was in the thick of it all.

When DBHS government teacher Monica Mahlmeister, asked the former West Virginia Secretary of State to speak at the school, Hechler said he jumped at the opportunity.

“I love to speak to students,” Hechler said. “I learn a great deal about what’s going on in the minds of young people.”

Hechler, 96, is an author of many books, a scholar, political leader and activist (although he prefers the term hell raiser), and Mahlmeister knew that he would be someone her students would enjoy speaking with.

“I hope he brings history alive for them and they appreciate meeting someone with a first-hand account,” she said.

One of Hechler’s first hand accounts he spoke about was interviewing Hermann Goering, Adolph Hitler’s second in command and successor at one time, before he was tried in Nuremburg, Germany for war crimes.

“I had to convince him I was not going to ask him questions about war crimes,” Hechler said. “I didn’t want him to clam up.”

Goering was sentenced to death for crimes against humanity but committed suicide by cyanide ingestion the night before he was to be hanged.

Hechler told the students he still has a hard time accepting that some people still don’t acknowledge the Holocaust happened, saying he had seen a German concentration camp.

“There were walking skeletons, dead bodies piled up like cardboard,” he said. “I saw it. I know it occurred.”

Hechler was also a speechwriter for President Harry Truman and told the students what it was like working for him.

Hechler explained to the students how Truman established NATO to draw a line between Europe and Stalin’s communist party. He also said Truman took a personal interest in his staff.

In 1958, Hechler was elected a US Congressman of West Virginia and was re-elected for 18 years. During that time, he was a member of the space committee that planned the first moon landing.

The students also heard how Hechler was the only congressman to march with Dr. Martin Luther King, Jr. from Selma to Montgomery, Ala.

King said to Hechler, “You are a part of history. Always remember what you were doing March 21, 1965.”

“The crowds around the march were very threatening,” Hechler said. He also received hate mail from many people in West Virginia for his participation in the march.

After Hechler was a congressman, he was elected to four, four-year terms as West Virginia Secretary of State, 1985-2001.

Hechler has also been very vocal about his opposition to mountain top removal in West Virgina and was even arrested in 2009 along with actress Daryl Hannah and many other people.

As a junior at DBHS, Shelby Hayes said she thought hearing about Hechler and his stories was pretty cool.

“There aren’t too many people left to tell about these things,” she said. “We just have to soak in as much as possible.”

Hechler left the students with a bit of advice about being socially responsible and taking part in the political process.

“Jump in and make this a better world,” he said. “Help bring peace and justice.”

The Lawrence County Workforce Investment Act has been awarded a Disaster National Emergency Grant. The grant will be used to... read more