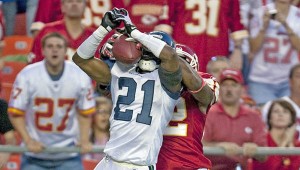 RENTON, Wash. (AP) — The Seahawks traded former first-round pick Kelly Jennings to Cincinnati for defensive tackle Clinton McDonald on Monday, giving the cornerback a chance to get past his disappointing times in Seattle.

Jennings was the 31st overall pick in the 2006 draft out of Miami, but struggled throughout his career in Seattle dealing with larger receivers. He played in 78 games and started 43 with the Seahawks, but had just two interceptions in his five seasons.

Jennings was deemed expendable with the development of Walter Thurmond and Seattle’s offseason acquisition of Brandon Browner.

“We looked at him in the offseason a little bit,” Bengals defensive coordinator Mike Zimmer said. “He can run. Now we have to try and get him playing good.”

The Bengals have been trying to upgrade their secondary since the NFL lockout ended. Starting cornerback Johnathan Joseph left for Houston as a free agent, deciding he had a better chance to win there. No. 3 cornerback Adam “Pacman” Jones is recovering from neck surgery and isn’t allowed to participate in contact drills.

“It seemed like a move that was good for both clubs,” Lewis said. “It’s sad we had to watch Clinton walk out the door in order for it to happen, but if he comes in like we expect, he can play 500-600 snaps this season, even more. He gives us some more depth.”

McDonald was a seventh-round choice of the Bengals in 2009. He played in eight games last season after being signed from the practice squad.