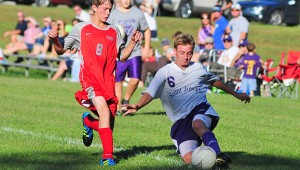 St. Joseph’s Tanner Carte (8) goes into a slide as he kicks the ball in Monday’s soccer game against New Boston. The Flyers won 3-0 and are now 2-0 on the season. (The Ironton Tribune / Kent Sanborn of Southern Ohio Sports Photos.com)

There was a reason the St. Joseph Flyers recorded a shutout.

The Flyers used a strong defensive effort to blank the New Boston Tigers 3-0 on Monday.

“The entire team played. Justin Mahlmeister had 12 saves and the four defenders played an excellent game in front of the goalie,” said Flyers’ coach Dan Blair.

Joseph Payton scored two of the St. Joseph goals and also had an assist to lead the offense. Eli Lewis added the other goal and Aaron Haas had an assist.

The Flyers host Northwest at 5:30 p.m. on Thursday.