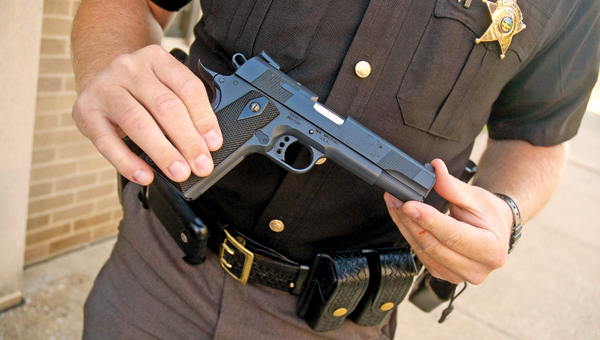 ROME TOWNSHIP — The Lawrence County Sheriff’s Office is investigating an incident Monday at Fairland Elementary involving an eight-year-old boy and a toy gun.

Sheriff Jeff Lawless said, as the students were boarding buses to go home, one child noticed what appeared to be a gun in the backpack of third grader and alerted the bus driver, who removed the child from the bus and called the sheriff’s office.

Lawless said the gun turned out to be an air-soft BB gun, a type of gun that shoots plastic, as opposed to metal BBs.

“These guns can sometimes look real,” Lawless said. The gun was dark gray in color and made to resemble a firearm much like the one Lawless himself carries.

He said, although his deputies are looking into the incident, at this time they believe the child did not intend to hurt anyone, he just brought a toy to school, unaware of the consequences of his actions. However, any discussion of weapons and schools merits close inspection.

“We do take these things very seriously,” Lawless said. “Our concern is for the safety of all the students.”

No one was injured in the incident. The child’s parents were called to retrieve their child and Lawless said they seemed shocked at what had happened.

Lawless urged parents who have purchased realistic looking guns for their children to paint them a less realistic color or otherwise mark them to make them more distinguishable from the real thing.

Robbery suspects among those indicted A man arrested in June in connection with the holdup of the University Mart in... read more