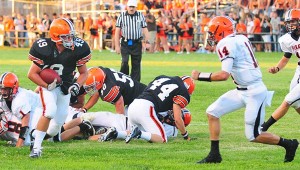 Maybe there’s no record for the fastest game played, but if there is such a record the Ironton Fighting Tigers and Russell Red Devils could make a run at it this Friday.

Both teams prefer to run the ball rather than go to the air and that could make for a quick game when they resume their series.

“Russell is going to line up and run right at you. They’re a lot like us,” said Ironton coach Bob Lutz. “Wheelersburg tried to spread us out, so this will be a different look for us to adjust to this week. We’ll see how tough we are up front.”

Ironton ran just 34 plays in last year’s game and all but three were on the ground.

“All their backs run hard and they will block for each other,” said Lutz. “Thompson not only runs hard and blocks well, but he’s a good athlete.”

Another key receiver is Michael Pennington who also has good size at 6-foot, 205.

“Their quarterback has a nice arm and he has some speed. I think he was 3 of 4 last week so he’s accurate, and he will tuck it and run,” said Lutz.

“They’ve got good size, experience, they’re aggressive and they like to trap you up and down the line,” said Lutz.

Most of the offensive starters flip over to defense and Lutz said “they are aggressive and they will fly to the ball.”

Pennington and Pierce are the tackles with Kenney and Dehoff the ends. Kibby is the nose guard.

Davidson and Spradlin are the linebackers and the secondary has Zach Thompson and Miles Mussetter at the corners while Tory Huffine and Dylan Howard are the safeties.