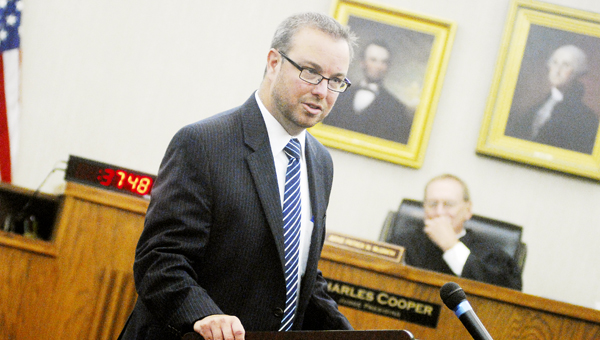 Assistant Lawrence County Prosecutor Brigham Anderson speaks to jurors during the August retrial of Megan Goff. Goff was convicted of murder in the 2006 death of her estranged husband, Bill Goff. The Tribune/Jessica St. James

In their motion, defense attorneys Paula Brown, William Bluth and Richard Parsons contended that under Ohio law, a charge of aggravated murder (with which Goff was initially charged) or murder can be reduced to voluntary manslaughter if the defendant acted out of a “sudden passion or rage” that was brought on by the actions of the victim.

“In this case, however, the jury was instructed to consider voluntary manslaughter ‘if you find the state failed to prove one of the elements of murder or if you are unable to agree as to whether the state proved beyond reasonable doubt the elements of murder or if you find a killing was committed knowingly,’” defense attorneys quoted jury instructions in their brief. They contended in their motion the jury should have been instructed differently and submitted jury instructions from another trial in another county as being more appropriate:

“If you find the state proved beyond reasonable doubt that the defendant purposefully caused the death of [the decedent] but you also find the defendant proved by a preponderance of the evidence that he acted while under the influence of sudden passion or in a sudden fit of rage, either of which was brought on by serious provocation occasioned by the victim that was reasonably sufficient to incite the defendant into using deadly force, then you must find the defendant guilty of voluntary manslaughter.”

Defense attorneys contend the jury got poor instructions and once they did, the poor instructions required them to cease its deliberations and not consider whether any mitigating factors were present that would lead to a conviction on the voluntary manslaughter charge.

Bluth, Brown and Parsons also asked in their motion that if the judge does not see fit to grant a new trial, that he instead modify her conviction from the murder charge to voluntary manslaughter.

But Anderson contended in his response that defense attorneys misquoted Ohio law in their request for a new trial. He said Ohio law does not allow for a new trial if the jury was improperly instructed, only if there is an irregularity in court proceedings or orders of the court, or if there is abuse of discretion by the court.

Anderson argued in his response that the jury was not only properly instructed but that the defense attorneys helped write the jury instructions, changed wording at times, and even included some phrases that he had objected to but were allowed anyway.

Anderson also argued in his response that McGrath should not amend her conviction from murder to voluntary manslaughter. He said while defense attorneys contended Goff acted in a fit of rage when she killed her husband, this was not the case.

He pointed out on the night Megan Goff shot to death her estranged husband, Bill Goff, she first arranged for the care of her children with relatives, took two loaded guns with her, tracked her husband down, parked her vehicle where it could not be seen, hid the guns and then knocked on the door of Bill Goff’s home and confronted him.

McGrath must now rule on the motion and response.

Megan Goff, 21, was convicted of murder earlier this month in Lawrence County Common Pleas Court. She was accused of shooting her estranged husband, Bill Goff, 15 times at his home in March 2006. She claimed she acted in self defense and that she had been abused during their marriage.

Her first trial in 2007 was a bench trial before Visiting Judge Fred Crow, who found her guilty of aggravated murder and sentenced her to life in prison with the possibility of parole after 33 years. But the Ohio Supreme Court overturned that conviction on the grounds a witness for the prosecution was allowed to testify on issues he should not have.

A new trial was ordered. The second jury found her guilty of murder, a conviction that carries a life sentence with parole eligibility after 15 years. Because she used a gun to commit her crime, an automatic three-years was added to the 15, making her parole eligibility possible after 18 years.