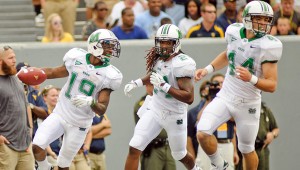 The Thundering Herd kept the Mountaineer fans quiet early in the game Sunday as Andre Booker returned a punt 87 yards for a touchdown at Milan Puskar Stadium in Morgantown, W.Va. during the Friends of Coal Bowl. (Courtesy Howie McCormick of Howie McCormick Photography.com)

MORGANTOWN, W.Va. (AP) — Geno Smith threw two first-half touchdown passes, Tavon Austin returned a kickoff for a score and No. 24 West Virginia beat Marshall 34-13 on Sunday night in a game that was stopped early in the fourth quarter because of lightning.

Smith completed 26 of 35 passes for 249 yards. Despite difficulty running the ball, West Virginia improved to 11-0 against its cross-state foe, including six wins since the series resumed in 2006.

Marshall was limited to 13 first downs, 187 total yards and no offensive touchdowns.

The game was first halted with 5 minutes left in the third quarter due to severe storms and play didn’t resume for three hours.

Play was stopped again with 14:36 left. But another hour went by before the game was called off, giving new West Virginia coach Dana Holgorsen a soggy, successful debut.

The game was delayed a total of 4 hours, 22 minutes and was the latest plagued by lightning and severe storms on the first weekend of the season.

Michigan’s game with Western Michigan was stopped for good late in the third quarter on Saturday. Games at Notre Dame, Iowa, and Tennessee were delayed by lightning and Eastern Michigan pushed back its home game from Saturday to Sunday.

The wide-open offenses that Holgorsen built the past three years as offensive coordinator at Oklahoma State and Houston produced average scores of 58-9 in season openers.

On Sunday, the Mountaineers had plenty of offensive plays. It just didn’t equate into that many yards, especially on the ground.

Now Holgorsen has a short week to figure out how what to tweak before Saturday’s home game against Norfolk State.

West Virginia freshman Andrew Buie got the start over three other running backs but was limited to a team-high 30 yards on 15 carries. He left in the third quarter after taking a hard hit, his arm dangling at his side.

On West Virginia’s next series, freshman Vernard Roberts was stopped for no gain on fourth-and-1 near midfield. Marshall took over and drove inside the West Virginia 10 but settled for Tyler Warner’s third field goal.

Austin extended West Virginia’s lead on the ensuing kickoff, weaving 100 yards into the end zone to put the Mountaineers ahead 27-13.

After Tyler Bitancurt’s extra point kick, play was stopped the first time as heavy thunderstorms moved in. Some in the sellout crowd gathered in the concourse, others went to a nearby indoor practice facility — and a steady stream of fans got in their cars and left.

Roberts capped West Virginia’s only possession after the first delay with a 1-yard score.

Duquesne transfer Willie Milhouse caught a 29-yard pass late in the second quarter to set up Smith’s 15-yard TD toss to Stedman Bailey for a 17-7 lead.

Marshall freshman Rakeem Cato was poised in his debut at quarterback but couldn’t get the Thundering Herd into the end zone. He went 15 of 21 for 115 yards without an interception.

Overall, Marshall struggled in the return of second-year coach Doc Holliday to his alma mater. He left West Virginia’s staff two years ago.

The Thundering Herd’s lone touchdown came on an 87-yard punt return by Andre Booker to open the scoring. Booker was called to duty after Troy Evans, last year’s regular punt and kickoff returner, was arrested earlier in the week on armed robbery charges.

Marshall managed just five first downs and 119 yards of offense in the first half, with most of those coming on the final drive that led to a field goal.

Marshall, which has lost 11 consecutive games to ranked opponents dating to 2003, heads home to play Southern Mississippi next Saturday.