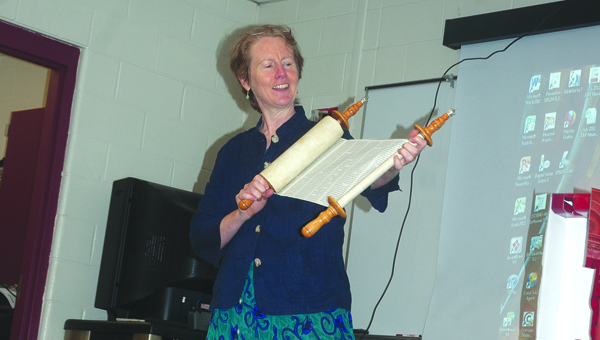 A group of Dawson-Bryant High School students was able to put a face with the tradition Friday when Rabbi Jean Eglinton came for a talk about the religion. She was invited to speak to students in Derek Parson’s Holocaust class as well as other history students.

Eglinton, rabbi at B’nai Sholom Congregation in Huntington, W.Va., talked to the students about some of the big ideas in the religion and culture and dispelled some popular myths and misconceptions.

“Once you meet a person from any particular group you have wondered about, it puts a human face on it,” Eglinton said. “I hope I was able to convey a wide variety of beliefs.”

Eglinton explained to the students that just like in any religion or in politics, there are varying degrees of beliefs. Among ultra orthodox, conservative, humanist and reform Judaism, Eglinton said she falls into the latter category.

One of Eglinton’s big ideas she conveyed to the students was action over belief.

“What you do is more important than what you believe,” she said.

Another was that the Old Testament is not Judaism, explaining that Jewish tradition 2,000 years ago is not quite the same as today, especially in America. She showed the students a toy Torah, a smaller version of the scroll that contains the first five books of the Hebrew Bible. She also explained the Talmud, a book that interprets the old stories and rules for new situations.

Interpretation is also something that Eglinton said is very important in Judaism.

“Anytime you have two Jews in a room, you always have three opinions,” she said, adding that questioning Scripture is a part of being Jewish. “Giving your own opinion is really important to us and important for learning.”

Justin Mullens, a junior in Parson’s Holocaust class, said Judaism’s culture of asking questions was something that struck him as intriguing.

“It was very interesting,” Mullens said. “It was a great learning process.”

The Holocaust, Eglinton said, is just one of many traumatic events throughout Jewish history, including the first Crusade in 1096 and the expulsion of Jews from different countries in Europe as early as 1290.

Eglinton also extended an invitation to visit her congregation in Huntington. Her congregation also reads thousands of names aloud of people who were killed during the Holocaust. The day is called Yom HaShoah, or Holocaust Remembrance Day.

Parson said as long as he is able to continue teaching the Holocaust class, he would like someone to come speak to the students about the Jewish culture.

“Jews aren’t this historic group from way back when,” he said. “They don’t all believe the same things.”

The class is in its third year at Dawson-Bryant.