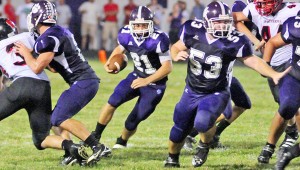 Not much has changed since then.

Both teams return most of their starters as they prepare to collide in a battle of unbeatens Friday on the Vikings’ home turf.

The Vikings (2-0) have eight starters back and the Panthers (2-0) have nine. First-year Chesapeake coach Andy Clark said with so many players returning, the Vikings appear better than last season.

“They’re improved. They have a lot of kids back, they’re a year old, bigger and stronger,” said Clark. “They basically have the same guys they had last year up front and they’ve got some speed in the backfield and they’re using the quarterback a lot more. He’s a nice athlete.”

The other offensive weapons are led by running backs Alec Herrell, D.J. Miller and Tyler Rowe.

But before handing the win to the Vikings, listen to Symmes Valley coach Rusty Webb who has plenty of concerns about the Panthers.

“They’ve got (Austin) McMaster at quarter and he’s a very, very good athlete. They throw the ball better than in the past,” said Webb. “They’ve got good, solid backs and they’ve got an experienced and physical offensive line.”

Webb said he expects both teams to flex their muscles.

“It’ll be a physical game and both teams will play hard. It’ll all come down to who makes the least mistakes on offense, defense and in special teams.”

Special teams worry Clark who referred to Miller returning a punt 82 yards for a touchdown to start last week’s game.

“You turn the ball over to them and they’re going to score. Special teams will be huge. Our return teams played pretty good the other night, but they have some good return guys,” said Clark.

While mistakes are also an issue in a game between two good teams, Clark said there is not really one area that is more important.

“Most of the time games are won and lost up front,” said Clark. “They have some nice athletes we have to find a way to contain. They have some nice linebackers with their defensive line. There are things to worry about all over the place.”

COLUMBUS (AP) — It’s always difficult when the hometown team is on a Buckeye’s schedule. That’s what is facing OL... read more