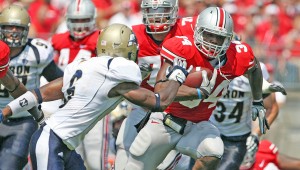 Ohio State running back Carlos Hyde (34) runs past the University of Akron defense during the second quarter at Ohio Stadium in Columbus last Saturday in a 42-0 win over Akron to open the season. The Buckeyes host Toledo this Saturday. (MCT Direct Photo)

COLUMBUS (AP) — Call them The Replacements.

In its season opener, No. 15 Ohio State found itself relying heavily on several players who few might have expected to be such integral parts of the team just a short time ago — before more prominent players were suspended or quit the team.

Joe Bauserman, Andrew Norwell, Carlos Hyde, Dominic Clarke and Verlon Reed all made their first career college starts. And almost all played extremely well in the Buckeyes’ 42-0 thrashing of Akron.

Once afterthoughts who were counted on to add depth at quarterback, on the line, at tailback, in the secondary and out wide, they’re now central figures for the Buckeyes as they prepare to take on Toledo on Saturday.

“All those guys showed up,” interim coach Luke Fickell said. “They didn’t dwell on it. They weren’t worried about the guys we were missing, and they stepped forward.”

Bauserman had a surprisingly good game as one of the two quarterbacks replacing three-year starter Terrelle Pryor, who left the program in the heat of an NCAA scandal this summer to jump to the NFL. He passed for three touchdowns and ran for another, with true freshman Braxton Miller tossing another scoring pass.

After two years holding a clipboard on the sideline, Bauserman was asked if he ever thought he’d be the main attraction at Ohio Stadium.

Norwell took over at left tackle for Mike Adams, one of four top players suspended for the first five games for taking cash and tattoos from the target of a federal drug-trafficking probe. The Buckeyes didn’t permit a sack of their neophyte quarterbacks and piled up 224 rushing yards.

Hyde got the call at tailback, where last year’s leading rusher, Dan Herron, is also among those sitting out the first five more games. Hyde, with just 24 carries as a freshman last season, rushed for 93 yards on 19 carries. Freshman Rod Smith added 74 yards on 18 carries.

“Coach called on me to be the starter today so I felt like I had to step into it,” Hyde said. “Next week, I’ll be ready. It was good to really get my feet wet as a starter.”

Clarke got the call on short notice to start at cornerback. Just 48 hours before the opener, Ohio State suspended starter Travis Howard (along with backup Corey “Pittsburgh” Brown and first-team tailback Jordan Hall) for accepting less than $300 in gifts from a charity. Clarke came through with four solo tackles, which was second-best on the team.

“When the news broke about the suspensions, I knew I was going to start because of the way the depth chart is set up,” he said after Saturday’s win. “I was sad for Travis, but I quickly realized it was a great opportunity for me to show what I can do.”

Reed took over at wideout in place of DeVier Posey, who is also sitting out the first five games for taking improper benefits, and Reed had three catches for 66 yards.

The last game that the Buckeyes played at Ohio Stadium — a 37-7 win over Michigan last Nov. 27 — most of those backups weren’t even listed on the two-deep roster.

“It was a lot of guys’ first time out there and playing in front of our fans is always a tough thing to do,” safety C.J. Barnett said. “They all came here because they can play and they proved it last week.”

So The Replacements aren’t going away any time soon — and maybe not even when those other players return.