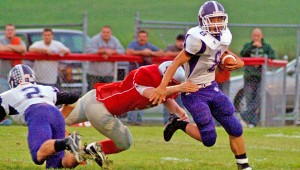 Chesapeake’s Patrick Hintz (8) tries to slip out of the grip of a Symmes Valley defender as he gains some of his 174 yards in the Panthers 20-3 win over the Vikings on Friday. (The Ironton Tribune / Robert Stevens of TheGoldStudio@yahoo.com)

WILLOW WOOD — The expected back and forth between the Chesapeake Panthers and Symmes Valley Vikings came to fruition, and it was the Panthers who won the tug of war in this round of the annual series.

After a scoreless first quarter that saw the Vikings intercept Chesapeake quarterback Austin McMaster twice, and a Chesapeake 79-yard punt return for touchdown called back for an illegal block in the back; the second quarter featured more of the same.

After Chesapeake (3-0) turned the ball over on downs followed by an interception of Vikings’ quarterback Cody Myers by Caleb Lindsey, and a Chesapeake punt, the Vikings got the ball with 1:29 left in the first half at the Panthers’ 42-yard line.

Seven plays later, the Vikings faced a fourth down, but a false start penalty moved the ball back to the 21-yard line.

On the next play, running back Alec Herrell found a crease for a 16-yard gain and a first down with :04 left in the half. After a timeout, Eli Ash kicked a 22-yard field goal to give Symmes Valley the lead 3-0 at the intermission.

After a Symmes Valley (2-1) punt to open the second half, Chesapeake running back Peter Hintz found an opening on the first play of the possession and gave the Panthers their first lead of the game on an 83-yard jaunt. The extra-point was blocked, and Chesapeake led 6-3 with 9:34 to go in the third. Hintz finished the game with 174 yards on 15 carries.

Both teams traded turnover on downs throughout the remainder of the third.

After trading punts to open the fourth quarter, Panthers’ quarterback Austin McMaster called his own number on two consecutive option plays, the latter resulting in a 56-yard touchdown run. Jacob Wells added the extra-point to give the Panthers a 13-3 lead with 9:39 to go in the game.

“We were able to move the ball into the red zone, but we kept having miscues that would stall the drive,” McMaster said. “Their linebackers are really good at clamping down on the middle, and having a (Peter Hintz) run that long touchdown freed up the middle for option plays.”

After a Symmes Valley fumble on the first play of their ensuing possession, Chesapeake took over at the Vikings’ 25. On the first play, the Panthers were able to keep possession after Hintz was stripped of the ball following a gain of 6 yards. The ensuing scramble for the ball resulted in an additional gain of 10 yards down to the Viking 9-yard line.

Two plays later McMaster found the end zone again, this time from one yard out. Wells added the extra-point to set the final score at 20-3. McMaster finished the game with 93 yards on 11 carries for the Panthers.

“I thought we played extremely hard and played well at times, but we shot ourselves in foot too many times tonight. We just did not execute when we needed to,” Symmes Valley head coach Rusty Webb said. “I give credit to coach Clark and his staff because they had their team prepared tonight.”

By JIM WALKER Tribune Sports Editor Tyler Hager ran the ball only seven times, but his first carry may have... read more