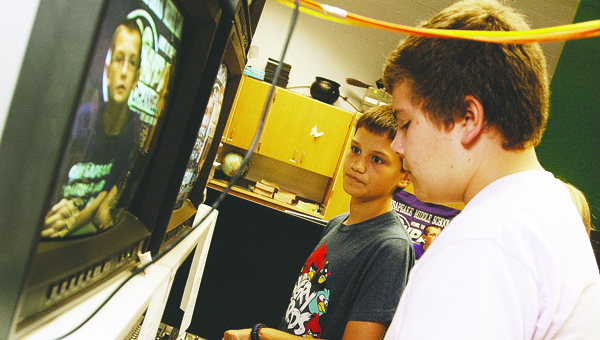 Nick Bane, left, works a video board while Kent Picklesimer, right, works the sound board during the video broadcast.

CHESAPEAKE — A new generation of students is learning the lasting impact of a tragedy.

On Friday, Chesapeake Middle School channel WPAW broadcasted a 15-minute program in remembrance of the 10-year anniversary of 9/11. Blake Ridenouer and Wesley Stephens presented an outline of that day’s events. The school also observed a moment of silence.

“It was the first attack of this magnitude since Pearl Harbor,” Rice said.

Several of the students only knew of the event through others.

“I was 3 or 4 (when it happened),” eighth grader Jessica Price said. “I know from what people have told me and what I’ve learned through school.”

Despite only hearing secondhand, the meaning of the event still resonates with the teenagers.

“Many families were broken up by the tragedy,” seventh grader Darby McCloud said.

Talented and gifted students teacher Terry Montgomery said the students did their own research to prepare for the broadcast and that they had been studying 9/11 in class all week.

“We have to remember our history,” she said. “These kids don’t remember the freedoms I had growing up, such as not having to go through airport security.”

Despite the cacophony around the attack, it still had a positive impact.

“You have a catastrophic event in this case that brought people together,” Rice said.