‘B’ Team hopes to raise awareness 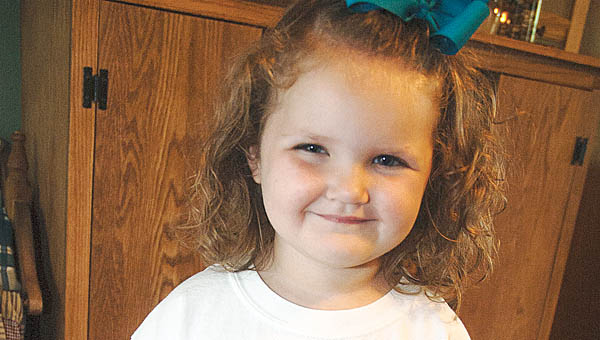 Soon to be 4-year-old Bailey Jo Murphy shows off her event shirt for the upcoming Food Allergy and Anaphylaxis Network walk in Columbus on Sept. 25.

In many ways, Bailey Jo Murphy is a typical little girl. She likes playing with her baby dolls and her dog. She’s excited about starting preschool this fall.

But because of the food allergies she was diagnosed with at a young age, the tot’s life is markedly different than of others her age.

As the 3 year old puts it, milk and peanuts are “itchy foods.” They, along with anything made from them, make the girl vomit and break out in hives.

It’s because of this that Bailey Jo can’t have many of the food items that some would consider common.

Macaroni and cheese, rice crispy treats, peanut butter and jelly sandwiches, cheese puffs — even the French fries from McDonalds are off limits.

“If you take one day and read labels and try to avoid milk, you’d be surprised,” her mother, Jamie Murphy, of Pedro, said.

But Murphy doesn’t want sympathy for her daughter; she wants awareness. That’s why she and a group of family members have formed the ‘B’ Team and are raising money to fund advocacy, awareness and research programs. The ‘B’ is for Bailey Jo.

The team will participate in the 2011 Food Allergy and Anaphylaxis Network Walk for Food Allergy.

The fundraiser will be in Columbus on Sept. 25. The team has so far raised about $500 through the sale of t-shirts and through collection cans.

“I want people to talk about it more,” Murphy said, adding that she wanted people to think about food allergies being more than a hindrance to their own children at school.

Bailey was diagnosed with an allergy to milk when she was 11 months old, but Murphy said she knew something wasn’t quite right with the girl months before that.

“I knew something was wrong before we left the hospital,” she said. The formula that Murphy was using to feed Bailey Jo was causing the girl to vomit.

Physicians told her she was feeding the baby too much. Besides the vomiting, Bailey Jo also had a rash on her bottom.

The girl was later diagnosed with the allergy after Murphy happened to meet a mother of a son with a similar allergy. The mother recommended an agency that diagnosed Bailey Jo without a referral from her pediatrician.

Her diagnosis with a peanut allergy came later. Murphy gave the girl a tortilla with peanut butter on it. Bailey Jo had only put the tortilla up to her mouth and decided she didn’t want it when the hives appeared. After that she was tested and diagnosed.

Murphy recalls the early days of not knowing what was ailing her daughter.

“At first it was very overwhelming when I didn’t know (what it was),” she said. “I felt helpless. Then I found out and just shopping is overwhelming. I’m always on guard.”

Murphy said she’s always reading the food labels to make sure nothing has changed in the ingredients. Some food items, like that of a brand by Walmart, are processed in milk, and must be avoided.

Murphy and her husband JT also have to be mindful of the things they eat when they’re around Bailey Jo. If they eat peanut butter or milk and then kiss the girl, she breaks out, she said.

“She’ll say, ‘did you eat something itchy?’” Murphy said. “She always asks. That always breaks my heart, that she has to worry about it.”

It hasn’t always been smooth sailing following the diagnosis. Murphy recalls a time when Bailey Jo accidentally drank from a friend’s cup of milk. They both had chocolate, only Bailey Jo’s was made from soy.

Because the girl used a straw, Murphy didn’t see the tell-tale hives that typically appeared on the girl’s face when she ingested milk. It wasn’t until a few minutes after Bailey Jo began a nap that Murphy realized what had happened.

“She woke up screaming and vomited,” Murphy said. “She said, ‘Mommy, I don’t like Addy’s milk.’”

Having a child with a food allergy means that Murphy constantly has to think of substitutes for the foods that Bailey Jo would otherwise eat.

Soymilk replaces regular milk. And Murphy said at events like birthday parties, she comes prepared with a type of cake that her daughter can eat. She doesn’t want to make others responsible for providing foods to accommodate Bailey Jo.

“I never want to put anyone out,” Murphy said.

Luckily for Murphy, the preschool where her daughter will attend already knows her through home-based head start. She said the staff at the Ohio University Southern Child Development Center has been wonderful. They’re taking steps to see that Bailey Jo is not around anything that could make her sick, she said.

“We have to be cautious with food allergies especially if they’re severe,” Debbie Bankston, the cook at the facility, said. “… We have to read the fine print. Reading the label and instructions is really important.”

Saddle Up for St. Jude event to raise funds for kids battling cancer