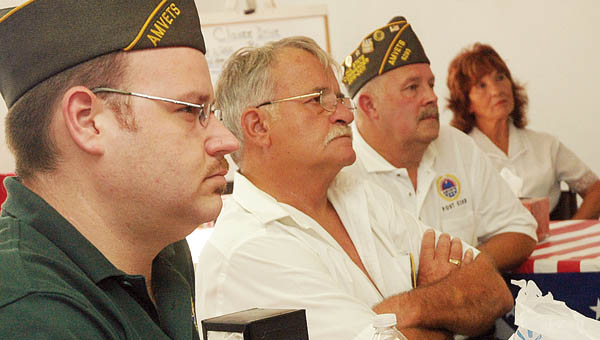 Dennis Lambert, left andother members of the AmVets 5293 take part in a 9/11 remembrance ceremony Sunday at the David Malone Memorial Post in Ironton.

It was a way to honor and remember those who lost their lives on a tragic day 10 years ago. About 20 members of the David Malone Memorial Post 5293 of Amvets met Sunday at their Ironton headquarters for a service to remember the victims of the terrorist attacks of Sept. 11, 2001.

“Each of us has a story (about that day),” Post Commander Myles Lewis told those gathered. His story was of being at work and oblivious to the attacks until he noticed that his frantic wife had been trying to reach him. She had had called him seven or eight times, he said.

“She kept saying, ‘What happened? What happened? They’re using planes to go into our buildings,’” Lewis recalled. After that he finally turned on a television set, he said.

After some opening words from Lewis, a prayer and a song, Dave Barker of the Amvets Department of Ohio spoke to those in attendance.

“America changed forever on 9-11-2001, without a question,” Barker said. “I can’t remember Pearl Harbor because I was 19 months old at the time but I do remember World War II and how America rallied after World War II.”

He described Sept. 11 as a time when the country was attacked by a “vicious, wicked enemy who we can’t really see because they don’t wear a uniform, they don’t follow the Geneva Code and they strike wherever they will.”

Barker also spoke of the actions the United States took after the attacks to ensure that something like them never happen again. The Patriot Act, which many argue took away from citizens’ rights to privacy, is something that is widely debated he said.

“Which is most important, a person’s privacy or their life?” he said.

“We were hit and we had devastation at Ground Zero,” Barker said. “From these ashes we became strong again.”

Barker also spoke of the veterans who fought in the wars in Iraq and Afghanistan, many of who have returned with ailments.

For veteran Bob Gibson of Kitts Hill, attending the ceremony was an act of patriotism.

“(I came) because I’m a veteran and I believe in our country,” Gibson, 75, said, adding that he served in the Korean War. “I believe in defending this country.”

If he was able, Gibson said, he would not hesitate to defend the country again.

“I’m an American through and through,” he said. “That’s all there is to it. I still believe in this country.”

‘B’ Team hopes to raise awareness

Soon to be 4-year-old Bailey Jo Murphy shows off her event shirt for the upcoming Food Allergy and Anaphylaxis Network... read more