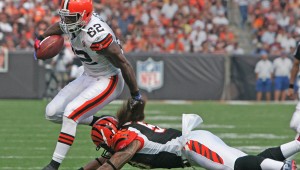 CLEVELAND — Bruce Gradkowski looked up field and couldn’t believe his eyes. There was nothing, just green grass and rookie receiver A.J. Green.

With a sudden snap, the Bengals had fooled Cleveland’s defense, leaving them flat-footed and out of position. Now, it was up to Cincinnati’s backup quarterback to complete the sneaky trick.

“I said, ’Oh my gosh, you gotta be kidding me’,” Gradkowski said.

The Browns were just as shocked.

Gradkowski caught Cleveland’s defense still in the huddle and quickly lobbed a 41-yard touchdown pass to Green in the fourth quarter, giving the whatever-it-takes Bengals a stunning 27-17 win Sunday over the Browns to spoil a sloppy debut in Cleveland’s first game under coach Pat Shurmur.

“The play is designed to catch them napping,” said Bengals running back Cedric Benson, who put the Browns away with a 39-yard TD run in the final minutes. “We caught them napping.”

Green, who hadn’t caught a pass all game, was left uncovered by the Browns, who were still huddled up when the Bengals lined up.

After taking the shotgun snap, Gradkowski, on in relief of injured rookie starter Andy Dalton, looked toward a wide-open Green streaking down the right side.

Green felt as if he was dreaming.

“I thought, ’Ball, please get down and into my hands,”’ the speedy first-round pick said. “It’s one of the slowest balls I’ve ever seen. It was one of the toughest catches I’ve ever had because I had so long to think about it. It took forever to get to me.”

Green hauled it in and sprinted untouched into the end zone to shock the Browns and their fans. Cleveland fell to 1-12 in season openers since 1999.

Shurmur isn’t convinced what the Bengals did was legal.

“They quick snapped us,” Shurmur said. “I’ll have to watch the tape, but it’s my understanding they changed personnel, lined up and then quick snapped. There’s rules that go along with that, so we’ll see. My understanding is when the offense changes personnel, the defense is allowed to do so as well and have time to do it.”

The play was equally surprising for the Bengals, who jumped in celebration at the improbable TD. This was the kind of play that usually happens to them.

“We just got lucky,” said center Kyle Cook. “I think they knew they screwed up. We just called it at the right time.”

Browns cornerback Sheldon Brown thought the Bengals got away with one.

“We were still in the defensive huddle when they snapped the ball,” he said. “It happened so fast, all I know there was a lot of people running wide open down the field.”

Colt McCoy threw two TD passes for the Browns, who were disorganized for much of Shurmur’s first game. Cleveland committed 11 penalties — 10 in the first half — but the Browns’ biggest offense was not being ready while protecting a 17-13 lead in the fourth quarter.

Cornerback Joe Haden, who had kept Green without a catch for more than 50 minutes and batted away five passes, was out of position and couldn’t catch Green.

“We weren’t ready,” Haden said. “Everybody was scrambling. Everybody was standing in the middle looking at D’Qwell (Jackson) trying to figure out what the call was. We never got one and when we heard everybody screaming, they were already lined up and we just started running.”

Benson, who recently served jail time on an assault charge, finished with 121 yards on 25 carries. Mike Nugent kicked field goals of 24 and 47 yards for Cincinnati.

Considered by some to be the NFL’s worst team, and with veteran quarterback Carson Palmer sitting out in a standoff with ownership, the Bengals somehow won their first opener since 2007. And they did it with Gradkowski, their third-string QB, who pulled one over on the Browns.

“Every once in a while you lose a game that makes you feel sick to your stomach,” Browns linebacker Scott Fujita said. “This is definitely one of those games.”

Dalton was hit by Browns rookie defensive tackle Phil Taylor on Cincinnati’s final offensive play in the first half. Dalton, trying to become only the fifth rookie since 1970 to win his debut on the road, finished 10 of 15 for 81 yards. He hopes to play next week at Denver.

Shurmur’s first quarter as a head coach couldn’t have gone much worse as the Browns were called for six penalties, gained 3 yards rushing and were badly outplayed.

Afterward, a red-faced Shurmur didn’t hold back when assessing his team’s disappointing outing.

Brown didn’t offer any excuses, but felt the officiating was one-sided. Cincinnati was only whistled for three infractions.

“It’s kind of frustrating, but in my eyes some of those calls are questionable,” he said. “The biggest thing is do not let this game trickle over into a whole season. That would be the most frustrating thing.”

Notes: Players and coaches on both sidelines helped hold the giant American flag that covered the entire field during a stirring pregame tribute to the 10th anniversary of 9/11. … Jackson had 11 tackles, two sacks and forced a fumble for the Browns. … Cincinnati leads the series 40-36. … The Bengals improved to 20-24 in openers, 7-13 on the road. … Browns punter Richmond McGee averaged 36 yards on eight punts, a poor debut that could lead to changes.

HOUSTON (AP) — The Indianapolis Colts were lost without Peyton Manning on Sunday. Matt Schaub threw for 220 yards and... read more