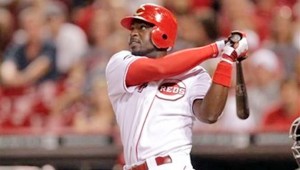 CINCINNATI (AP) — Dontrelle Willis has pitched better than his 0-6 record. Monday night was not one of those games.

Starlin Castro homered, scored four runs and drove in three while extending his career-high hitting streak to 13 games and leading the Chicago Cubs to a 12-8 win over the Cincinnati Reds in the opener of a four-game series on Monday.

Willis (0-6) remained winless despite six quality starts in 12 outings this season but the Cubs pounded out nine hits worked three walks off the lefthander making a comeback after two nightmare seasons.

“I didn’t do anything right tonight,” Willis said. “My location was bad. My pitch sequence was bad. It was just one of those nights.”

“I couldn’t put anyone away,” Willis said. “They had a different approach from last time. Hats off to them for that. I will take it as a butt kicking and go back to the drawing board.”

Aramis Ramirez also had three hits, including a double and his 25th homer of the season, and Jeff Baker added a home run as the Cubs won a third consecutive game for the first time since Aug. 15 and matched their season high in runs. They also scored 12 in a 12-7 win over Milwaukee on June 16.

Rodrigo Lopez lasted 5 1-3 innings to earn the win despite allowing nine hits, including all four of Cincinnati’s homers, and five runs. Lopez (5-6) had a walk and a strikeout.

Francisco got the Reds on the board with his third homer of the season, a mammoth drive off of Lopez’s 1-0 pitch in the second inning. The 502-foot shot is second-longest at Great American Ball Park since it opened in 2003 to Adam Dunn’s 535-foot shot to right-center in 2004.

“He is a powerful young man,” Dusty Baker said. “That was the longest home run I’ve seen in a long time. When he gets his pitch, he can really turn on them. He is aggressive. You’d rather have that in a young hitter because you can calm them down. He is getting better at getting good pitches the more he plays.

“I hit some out of the stadium at Dayton,” Francisco said. “I didn’t get the ball (but) they put a branch over my locker. It knocked it off a tree.”

Willis followed one out later with a vicious line-drive single off of Baker’s glove at first base, and Brandon Phillips — who got his first day off on Sunday since Aug. 13 — hit his 13th homer, a 459-foot shot into the second deck in left field.

The Cubs regained the lead in the third on Baker’s third homer of the season, a 372-foot opposite-field drive into the second row of the right-field seats. They broke the game open with three runs in the fourth, the first scoring on the first of Castro’s two doubles in the game. He added a two-run homer in the fifth, and Ramirez led off the sixth with his 25th homer of the season.

Phillips led off the Reds’ fifth with his second homer of the game, giving him two multihomer games this season and eight in his career, and rookie catcher Devin Mesoraco hit the first pitch of the sixth inning into the left field seats for his first career home run.

“It was good to get the first one out of the way,” Mesoraco said. “I had hoped my first one would be more meaningful, like a walk off. I got the ball. A guy that just got back from Afghanistan got it and gave it to me, that was nice.”

Notes: Reds utility INF Chris Valaika will have season-ending surgery next week to repair a torn anterior cruciate ligament in his right knee. He was hurt in the top of the fifth inning Sunday at Colorado when his spikes caught in the dirt as he was swinging at a pitch from LHP Drew Pomeranz. … SS Zack Cozart, already sidelined with Tommy John surgery on his left (non-throwing) elbow, is scheduled to have minor surgery to clean out his right ankle. … RHP Mike Leake’s start Tuesday against the Cubs is expected to be his final start of the season. Leake has logged 159.2 innings, 21.1 more than he pitched last season, and the club is trying to limit him to an increase of about 30 innings. … RHP Ryan Dempster, Chicago’s scheduled starter on Tuesday, is 2-0 with a 3.00 ERA in his last three starts against the Reds.