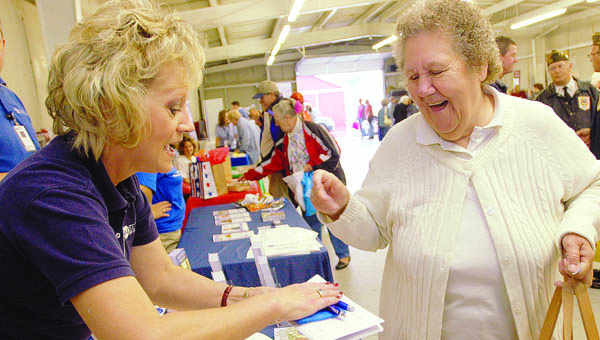 The weather did not sound picnic ready: slushy grass, watery mud and a nippy breeze.

Still, organizers of the first annual Senior Picnic at the Lawrence County Fairgrounds improvised and moved the occasion indoors to the barns Tuesday.

“We were going to have a car show, but what can you do?” Mike Payne, director of senior services, said.

Due to budget cuts, the Lucasville Senior Expo won’t happen so this picnic was the replacement.

“We wanted to have a day for seniors,” Payne said.

“It appears everyone is having a good time even though it’s cold and wet outside,” Edna McClain, Lawrence County AARP chapter member, said.

One of the booths present was advocating for a senior citizens levy.

“Lawrence County is the only county around who does not have a levy,” McClain said. “With it we can use local money to take care of people who don’t meet state or federal guidelines.”

McClain said the CAO, who funds several senior services in the county, is running out of money and looks for other sources to pay for programs like Meals on Wheels.

“It’s a wonderful opportunity for the students,” Sherry Bennett pre-nursing instructor said. “They applied the skills they have learned and give back to the community.”

Officers from Veterans Foreign War 6878 brought in a United States flag and a VRW flag. The officers asked a moment of silence be observed for the victims of 9/11.

The event wasn’t all business and solemn. Crafts and music by Joe Freeman and Crystal Hunt in took place the 4-H building, while two representatives from Mary Kay Cosmetics prepped contestants for a fashion show.

McClain said a health expo for seniors will happen October 13 at South Point High School and next year the CAO and AARP may combine the two events next year.