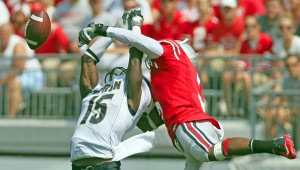 University of Akron receiver Marquelo Suel, left, has a pass over the middle broken up by Ohio State’s Dominic Clarke during the second quarter at Ohio Stadium in the season opener won by the Buckeyes 42-0. Ohio State plays at Miami, Fla., on Saturday. (The Ironton Tribune / MCT DIRECT Photo)

COLUMBUS — No players who were in uniform that night are still on scholarship, and only a handful of coaches remain at the schools.

A lot has clearly changed since No. 2 Ohio State stunned top-ranked Miami in double overtime to win the 2002 national championship.

Yet that doesn’t mean the game still doesn’t fire the imagination, particularly as the 17th-ranked Buckeyes and Hurricanes prepare to meet again on Saturday.

“That’s just a special memory, that you’re fortunate to have that opportunity to be in that situation, the way that thing turned out,” Buckeyes offensive coordinator, then and now, Jim Bollman said of Ohio State’s dramatic and controversial 31-24 victory. “When you do this as long as I have been doing it, you’re lucky to be in one of those kind of situations.”

The nine years since that night in the desert has seen the two programs go in different directions — and yet end up in almost the same place.

That 2003 Fiesta Bowl game that decided the Bowl Championship Series title vaulted Ohio State to a golden era, at least in terms of success on the field. The Buckeyes played in two more national championship games, losing each time, and have remained in the national-title hunt ever since.

Miami represented the college game’s greatest dynasty during its glory years from 1983-2002. Since the loss to Ohio State at Sun Devils Stadium in Tempe, Ariz., the Hurricanes have gone through three head coaches and haven’t been a factor in years in the debate over No. 1.

Their opening-game loss to Maryland on Sept. 5 was their fourth in a row overall, and they haven’t won a bowl game since edging Nevada by a point in the 2006 MPC Computers Bowl.

Off the field, both are facing hard times.

The Buckeyes still have four players suspended for accepting cash and discounted tattoos from a Columbus tattoo-parlor owner. That scandal opened up a hornets’ nest of other allegations and a lengthy NCAA investigation that eventually led to 10-year coach Jim Tressel being forced out for knowingly playing ineligible players during the 2010 season. Other players have left the program and Ohio State offered to vacate last year’s 12-1 season, give up 2010 bowl revenue and serve two years of NCAA probation. Fans are awaiting the final sanctions from the NCAA’s committee on infractions.

On top of all that, three other players were suspended for the first two games for accepting $200 fans at a charity event. They were cleared this week and are expected to play against the Hurricanes.

Miami just got five players back from one-game suspensions for taking improper benefits from former booster Nevin Shapiro, the man behind a Ponzi scheme that cost investors’ millions. Three other Hurricanes must sit out until next month for more serious violations involving Shapiro.

Now, both schools are left with first-year coaches trying to hang on to the reins at programs that have taken lethal hits.

Despite the recent troubles, despite Tressel’s tainted legacy, Ohio State fans and coaches can still recite where they were when the Buckeyes won their first national title in 34 years.

Asked what he remembered most about that game, Buckeyes defensive coordinator Jim Heacock, now in his 16th year on the staff, couldn’t name just one thing.

“Everything: The pregame, the postgame, the halftime, the sideline,” he said.

Most of Miami’s players were in elementary school when the game was played, so the memories aren’t necessarily vivid. Still, it remains painful for the Hurricanes.

Wide receiver Allen Hurns, a Miami native who grew up a Hurricanes fan, refers to it as “that loss that we had back then.”

“I want to go out there for the team that didn’t beat them,” said Hurns, Miami’s top receiver against Maryland. “I want to represent for them.”

The list of stars on the field for the Fiesta Bowl showdown — many of whom went on to glittering NFL careers — was remarkable. Ohio State had quarterback Craig Krenzel, tailback Maurice Clarett, wide receiver Michael Jenkins, defensive lineman Will Smith, linebacker Matt Wilhelm and safety Mike Doss. The Hurricanes boasted back Willis McGahee, quarterback Ken Dorsey, linebacker Jonathan Vilma, tight end Kellen Winslow and defensive back Sean Taylor. And there were many others, on both sides.

“There’s probably more guys in that game that became first-round draft picks or truly are big-time players in the NFL than maybe any game I’ve been involved in,” Fickell said.

The game tilted on a late flag. On the last play of the first overtime, the Hurricanes had already begun celebrating their sixth national title and second in a row when field judge Terry Porter finally called Miami’s Glenn Sharpe for defensive holding, giving the Buckeyes a second chance that they converted into a score.

Clarett, the star of the game who would later spend 3 1/2 years in prison and never play in an NFL game, burst 5 yards for the decisive touchdown in the second overtime. Then Ohio State linebacker Cie Grant blitzed Dorsey into a hurried throw on fourth down to touch off a party back in the Buckeye state.

But that’s all ancient history, right?

Miami offensive line coach Art Kehoe is still with the Hurricanes. One of the more emotional members of the staff, even Kehoe is downplaying the significance of the history between the schools.

“It means nothing. These kids were in sixth grade. It means absolutely nothing to these kids,” Kehoe said. “I don’t think they even know some of the players who were around, most of them. To me, you’re playing Ohio State. What needs to be said? If you wake me up in 3011, is Ohio State going to be bad? They’re good. They’re good and we’d better be ready.”

The Associated Press CINCINNATI — Jay Bruce’s first game-ending home run of the season didn’t have the impact of his... read more