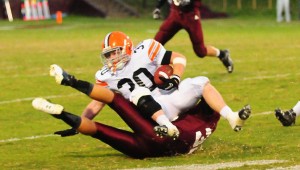 Ironton Fighting Tigers’ running back Tyler Hager is pulled down but lands on an Ashland defender, rolls off and runs to the end zone. Hager was ruled down despite never touching the ground during the first quarter of the Fighting Tigers 28-6 loss on Friday at Ashland, Ky. (The Ironton Tribune / Tony Shotsky of Southern Ohio Sports Photos.com)

ASHLAND, Ky. — It was just September, but it seemed more like Halloween for the Ironton Fighting Tigers and Christmas for the Ashland Tomcats.

Ironton rolled up 310 yards of offense and did not punt until the final minute of the game, but four lost fumbles and a dropped touchdown pass became a nightmare as the Fighting Tigers lost 28-6 to Ashland on Friday night at Putnam Stadium.

“You have to block, tackle and take care of the ball,” said Ironton coach Bob Lutz. “I thought we blocked pretty good, but we didn’t tackle well and we put it on the ground too much. It was like two years ago.”

Lutz was referring to a 26-12 loss two years ago at Ashland when the Fighting Tigers lost three fumbles, dropped a touchdown pass and an interception.

“That’s part of the game,” Lutz said of the fumbles that made it seem like Christmas morning for the Tomcats.

Ashland (4-1) scored on the first possession of the game as Sam Hunter hit Cody Withrow with a 6-yard pass to finish off a 61-yard, 11-play drive and it was 6-0.

Ironton (3-1) came right back and drove 66 yards. Tyler Hager ran 4 yards and appeared to have broken the plane, but it was ruled the ball was stripped and Ashland recovered in the end zone.

Ashland used a 42-yard pass to Withrow to get to the Ironton 15. Ironton’s defense held on a fourth-and-8.

Ironton marched from its own 6-yard line to the Ashland 21 only to drop a fourth down pass that would have been a touchdown with just 1:20 left in the half.

The Fighting Tigers got to the Ashland 41 to start the second half, but they fumbled and the ball landed in the hands of Evan Yongue who returned it all the way to the Ironton 20.

Again, Ironton held on downs at the 19.

The Fighting Tigers then drove to the Tomcats’ 21 only to fumble the ball away again.

“We had the guy out there and missed a couple of tackles. But (Whetsel) is a good player,” said Lutz.

Ironton got within 22-6 with 6:18 left on a 20-yard scoring pass from a scrambling Tyler Kratzenberg to Skylar Fields on fourth down.

But Ashland came back to score on a 6-yard run by Hunter with 2:46 left to seal the outcome

Tanner Schweickart ran eight times for 73 yards as Ironton rushed for 234 yards. He also caught a pass for 45 yards but got credit for only 24 due to a penalty.

Kratzenberg was 5 of 9 for 76 yards and a score. Hager had 52 yards but left the game early in the second half with leg cramps and did not return. Trevor White had 56 yards.

Ashland ran for 136 yards and Hunter was 13 of 18 for 228 yards passing to give the Tomcats 64 more yards of offense than Ironton.

By JIM WALKER Tribune Sports Editor LUCASVILLE — When two high-powered offenses go head-to-head, something has to be the deciding... read more