Learning how to save lives 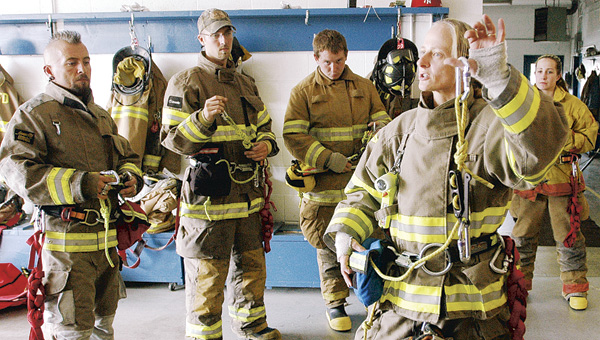 The fire school offers firefighters a chance to earn continuing education credits, said Tate Tooley, chairman of the fire school committee and a member of the Rome Township Fire Department.

“The whole reason we do this — the number one thing is safety,” Tooley said. “We want to provide them with tools to do their jobs as safely as possible.”

All of the firefighters are volunteers, Tooley pointed out. They all sacrificed time away from family to be there, he said.

“If you join they’ll provide you with the equipment and the training that you need,” Tooley said.

Captain Jan Rader of the Huntington Fire Department taught a course on the self-contained breathing apparatus. In the class, fire fighters learned basic survival skills that they would need in a worst-case scenarios, Rader said.

“It’s very important for every fire fighter to have this training,” Rader said.

Firefighters in the class took turns practicing bailing out the window of a simulated building, about five feet off the ground. Rader and a fellow instructor taught them how to do so safely, though they cautioned that it would be awkward at first. Participants first went though in their street clothes and later added some of their gear.

“Probably when we start adding gear it will be more difficult,” Allen said.

This is Allen’s second year as a firefighter and participating in fire school.

“They always have very good programs set up,” she said.