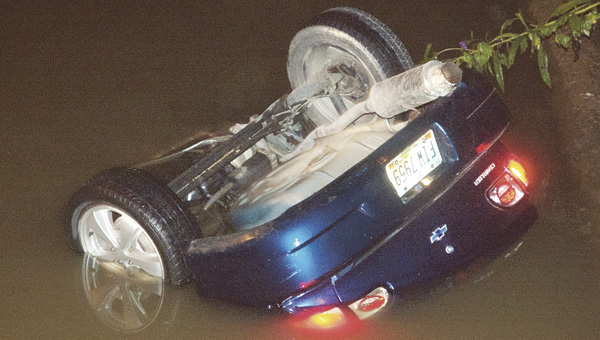 The taillights of a blue cavalier remain on following a one-vehicle accident on Lawrence Street Road early Wednesday morning.

Ironton Police have released the names of two men who were killed Wednesday morning in a single vehicle crash on Lawrence Street Road near Moulton Field.

Police Chief Jim Carey said Joseph C. Leith, 23, of Ironton, and Drue Yates, 19, who is also believed to be from Ironton, were killed in the accident.

Carey said he did not know whether they died because of the impact of the crash or by drowning, as the vehicle they were in had turned upside down in Storms Creek.

Carey said he also did not know who was driving. Neither man had identification on them, which delayed the ID process.

A witness said the vehicle was traveling at a high rate of speed when it struck a guardrail and went into the creek.

The vehicle landed on its top; the witness said while his girlfriend called 911 he went to the car to help but was unable to get the doors open to reach either person inside.

Man gets four years for burglary