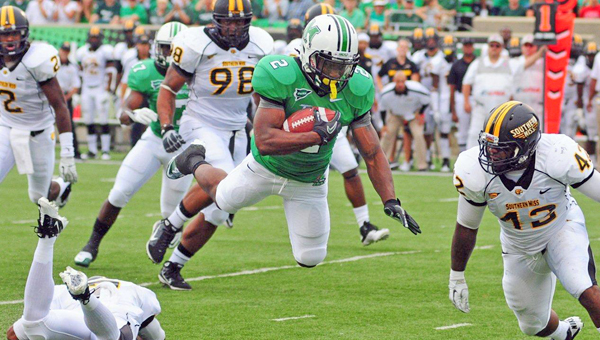 Virginia Tech is making no apologies for what many think is an easy early schedule.

The No. 13 Hokies travel to Marshall on Saturday, wrapping up a non-conference slate that includes no teams from any of the power conferences. It came at a good time for the Hokies, even though their 17-10 victory at East Carolina caused them to drop two spots in the Top 25.

“We enjoy being under the radar because it gives us time to work out all of our kinks we’ve had so far,” guard Greg Nosal said this week. “We’ve really been able to really work on our whole team. We were able to really work some stuff out and get rolling here pretty soon.”

The kinks include breaking in redshirt sophomore quarterback Logan Thomas, who will be making just his fourth career start on Saturday, and new starting tailback David Wilson.

The offense has, predictably, struggled some, especially against East Carolina. Josh Oglesby scored the winning touchdown midway through the fourth quarter, giving Virginia Tech a 17-10 victory against a team that had allowed 56 points in its opener against No. ss South Carolina.

The Thundering Herd (1-2) is unlikely to provide much off a test, even at home. Marshall, like East Carolina a member of lower-rung Conference USA, is coming off a 44-7 loss at Ohio.

On defense, even with six new starters, the Hokies rank eighth nationally, allowing just 224 yards and 10 points per game. Much of the damage has come against reserves, which makes confidence the biggest thing they’ve gained from victories against Championship Subdivision foe Appalachian State, East Carolina and Arkansas State — all of whom run a spread offense.

The Hokies still don’t shy away from the fact that this year’s non-conference games pale in comparison to recent seasons when they opened against the likes of Alabama and Boise State.

“We certainly don’t have the marquee matchups that we’ve had in the past,” wide receiver Danny Coale said, adding that the Hokies’ stature means they still get the opponents’ best.

Scoring in the red zone are concerns, he said, regardless of who they are playing, and things they need to improve before “going into the more meaty part of the schedule.”

That comes next week, when Clemson visits Lane Stadium, and a 56 percent touchdown rate (10 of 18) in the red zone and 72 percent scoring rate (13 of 18) will likely need to be better.

In the interim, the more work — and success — Thomas has, the less likely that teams will stack the box to slow the more proven Wilson and dare Thomas to try and beat them.

“You just have to pick your poison,” Holliday said. “In today’s world of college football, if you load the box to stop the run and that quarterback has the ability to beat you with his arm, then you have some issues. Same difference if you play a cover two with five under, then they have the opportunity to run the football. You have to mix and match. Disguise coverages.”

Wilson has 384 rushing yards in three games and is averaging 6.3 yards per try, while Thomas has completed 52.8 percent of his attempts with four touchdowns and three interceptions.

Coach Frank Beamer said Wilson could be the key to opening things up.

“I think you work to get him in open spaces and then you … use him as a decoy,” Beamer said. “I think he kind of serves two purposes there, and both of them can help your offense.”

It can also get them closer to being ready for tougher opponents ahead.

Miller will start at quarterback for Ohio State

The Associated Press COLUMBUS — An 18-year-old true freshman is being given the keys to the Ohio State offense. Interim... read more