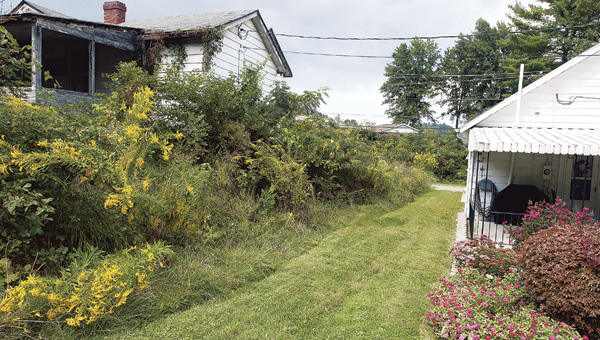 A neighbor’s yard, seen from various views, has been the burden of the neighborhood especially for nextdoor neighbor Catherine Chatfield. Chatfield contends the yard brings unwanted animals ranging from hornet nests to snakes and increases the possibility of a brush fire.

UPPER TOWNSHIP — Catherine Chatfield’s Coryville Road home is a picture of neatness and floral artistry. zthe walkways are edged, the grass is trimmed and the flowers are still blooming in abundance in the front and back yards.

Like other Lawrence County homeowners, Chatfield’s place is her own little piece of heaven. But next door, the lawn hasn’t been mowed in months and in some places the weeds, some of which have gone to seed, are six and seven feet tall.

“The property is a haven for wild animals, snakes, opossums and many, many cats,” Chatfield told the Lawrence County Commission Thursday.

Former neighbors Ron and Judy Wilson moved into Ironton six years ago and left the Coryville Road house abandoned. Chatfield said the Wilsons tried to cut it once or twice but eventually stopped.

Chatfield has battled the tall weeds ever since and has tried to enlist the help of the Upper Township Trustees and the Lawrence County Health Department. She asked if the commission would help.

Both-trustees and the health department are, by state law, charged with handling such matters as derelict properties and overgrown weeds. Chatfield said she would be happy if anyone will do the work; she is simply tired of living next door to the mess.

“Something needs to be done now,” she said. “I’m sure you wouldn’t want to live next door to an abandoned property.”

She asked if the property could be cleaned up and the cost put on the owner’s taxes. Commissioners said it could be done, but the problem with this is that the governmental agency that does the work, be it trustees or the health department, has to pay to have the work done but then wait months until tax time to be reimbursed for their efforts. Most governmental agencies are working on a tight budget to begin with. Most can’t afford to wait months to be reimbursed.

Commissioner Les Boggs said he is looking into ways to fix the problem.

Commissioner Bill Pratt said he knew of other cases where homeowners have been irresponsible or not maintained their property for various reasons.

When contacted about Chatfield’s problem, Lawrence County Health Department Director Georgia Dillon said there are probably 200 similar cases throughout Lawrence County, more than her agency can handle. She agreed with commissioners that it is difficult to be reimbursed once the work is done.

“Nobody wants to make any money (cutting weeds on derelict property) but we would like to get our money back,” Dillon said.

Ultimately, Dillon said the responsibility for keeping property clean and neat belongs to the property owner. Dillon said she does not have a solution to the problem of those homeowners who do not do what they’re supposed to do.

“I really feel bad for these people (like Chatfield), I really do,” Dillon said.

“I would love to sell it,” she said. “We thought we had it sold once.”

Told there is a mimosa sapling growing out of her basement foundation, Wilson replied, “I haven’t been out there for a while.”

Upper Township trustee Craig Thomas said Thursday evening he will talk to the other two trustees about what they can do to help.

“We’ve cut the grass out there a couple of times,” he said. “The lady next door keeps her place very neat.”

Jesse Stuart is a man who never forgot where he came from, in part because he never strayed far from... read more