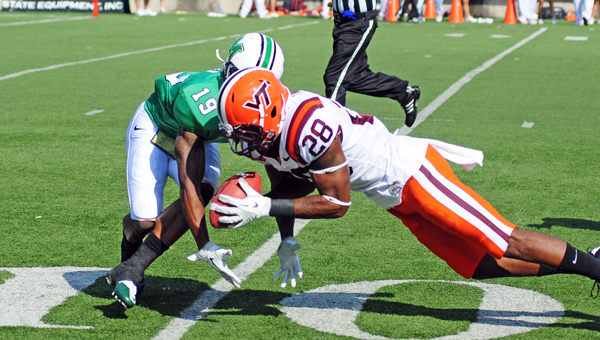 HUNTINGTON, W.Va. (AP) — Marshall continued its self-destructive ways, failing to capitalize on several big play opportunities in a 30-10 loss to No. 13 Virginia Tech on Saturday.

A week after giving up six first-half turnovers during a stunning 37-point loss to Ohio, the Thundering Herd again couldn’t overcome its own critical mistakes.

Though the Hokies (4-0) struggled themselves at times, Marshall coach Doc Holliday said the Thundering Herd (1-3) had trouble with Virginia Tech’s physicality.

“I don’t know if we’ll see another team that physical,” Holliday said. “The quarterback, Thomas, he almost reminds you of Cam Newton with that size.”

Although Virginia Tech dominated much of the contest, it was an early Marshall mistake that arguably set the tone for the game.

After holding Virginia Tech without a first down on the game’s first possession, Marshall took over on its own 32.

On the Thundering Herd’s third offensive play, quarterback Rakeem Cato hit wide receiver Aaron Dobson for a 32-yard gain. But before Dobson hit the ground, Virginia Tech’s Jayron Hosley forced the ball out of Dobson’s hands and recovered on the Virginia Tech 26.

“I don’t know what that (fumble) did to us, to be honest,” Holliday said. “It would have been nice to have kept the ball, that’s for sure.”

The first traveled 23 yards to the 50, setting up Thomas’ 5-yard run to open the scoring midway through the first quarter. Whitehead’s next kick went just 29 yards to the Hokies 42 and Wilson carried four consecutive times to cap the drive, scoring from 3 yards out late in the quarter. Marshall blocked the extra point to keep it 13-0.

Oglesby added a 4-yard score with a nifty spin move early in the second quarter to make it 20-3, but even that drive was kept alive by a third-down pass interference call on Marshall. Even so, it looked as if the Hokies might take a comfortable lead into the locker room. But Cato cranked up the deep passing game again, moving the Herd 71 yards in 38 seconds, capping the drive with a 29-yard scoring pass to Dobson, who beat his man easily at the line in single coverage and jogged into the end zone to cut Tech’s lead to 23-10.

Marshall was in the game in the second half as well, but Oglesby added a 5-yard TD run early in the fourth quarter and the Hokies defense stopped the Herd on fourth down near their own end zone to seal the win.

The Hokies defended their cupcake early schedule this week after needing a late touchdown to beat East Carolina of Conference USA 17-10 — a win that nevertheless dropped them two spots in the Top 25 — and failing to run away from the Sun Belt Conference’s Arkansas State in a 26-7 win last week. They’ll find out just how far they’ve come against Clemson, who come to town after dropping No. 11 Florida State 35-30 on Saturday.

The day started poignantly for Virginia Tech coach Frank Beamer, who laid a memorial stone at the Marshall University Memorial to the 75 players, coaches and members of the university community killed in a 1970 plane crash. Two of the coaches killed in the crash — coach Rick Tolley and assistant coach Frank Loria — were Virginia Tech graduates and Loria and Beamer played together in the mid-1960s.