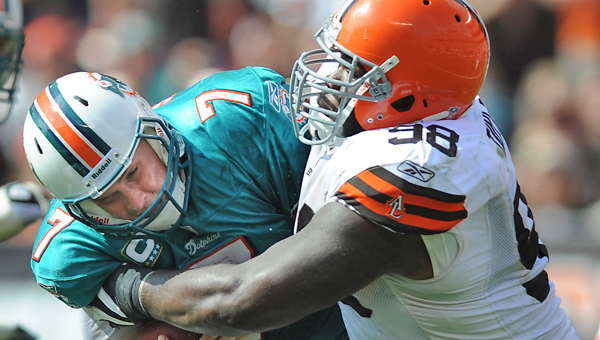 CLEVELAND (AP) — Colt McCoy paced Cleveland’s sideline trying to rally his teammates. So bad for nearly 57 minutes, the Browns were down, not done.

“We need one drive,” McCoy recalled telling them. “One drive and we can win this thing.”

McCoy made good on his promise, throwing a 14-yard touchdown pass to Mohamed Massaquoi with 43 seconds left, capping an 80-yard drive to rally the Browns to a 17-16 win Sunday over winless Miami, a deflating loss that will bring even more heat on embattled Dolphins coach Tony Sparano.

Before his game-winning TD toss, McCoy had overthrown, underthrown and flat-out missed receivers all afternoon. But when it mattered most, he completed nine of 13 passes for all 80 yards to six different receivers on Cleveland’s winning drive, making up for a forgettable performance by Cleveland’s offense.

“We played like garbage for the most part of the day,” McCoy said. “As ugly as it was, it was a huge win for us.”

Getting the ball back with 3:23 left, McCoy worked the ball down to Miami’s 14, picking up a key fourth-and-4 conversion and helped along by an offsides penalty on Dolphins end Jason Taylor. On first down at the 14, McCoy made the defining play of his still budding NFL career.

Dropping back, he pump faked before lofting a perfect pass to the right corner over rookie cornerback Jimmy Wilson and to a leaping Massaquoi.

“My best throw of the day,” McCoy said. “Mo did a nice job and got that guy (Wilson) to bite just a little bit. He wasn’t that open, but in the NFL, when they’re like that, you just gotta make a good throw. Mo did a great job of getting his feet in. It was a great feeling.”

McCoy’s composure on the tense final drive comforted his teammates. He knew what it would take to win.

“Colt was relaxed,” Massaquoi said. “Nobody was panicking and nobody was worrying. The mindset was just to go down there and get a touchdown.”

Wilson accepted blame for letting Massaquoi get behind him.

“That’s what they have me out there for, to make plays in situations like that,” said Wilson, who intercepted a pass by McCoy in the first quarter. “I could have given up anything underneath, but I didn’t get back there deep enough. I mistimed my jump. If I would have been back one more step, we wouldn’t be talking about how we lost the game.”

Even after taking the lead with precious seconds left, the Browns (2-1) had to withstand a late comeback by the Dolphins. Cleveland’s win wasn’t sealed until safety Mike Adams intercepted Chad Henne with 13 seconds left.

With two road games upcoming, the Dolphins (0-3) were desperate for a win to ease the pressure building on Sparano, who has been under fire from disgruntled Miami fans. Sparano wasn’t asked about his future afterward, but time could be running out on his tenure.

Sparano has seen progress, just not enough from the Dolphins.

Dan Carpenter’s third field goal, a 38-yarder, put the Dolphins up 16-10, giving McCoy the ball back with enough time to rescue the Browns. However, based on the way he was playing, the Browns’ chances didn’t appear good and Cleveland fans braced themselves for the reality of a second straight home loss.

But McCoy, who was just 10 of 26 for 130 yards at the time, took what the Dolphins defense allowed, throwing mostly short passes — three to rookie wide receiver Greg Little, who didn’t get his first catch until 2:58 remained. McCoy, who has a tendency to drift outside when pressured, stayed in the pocket and delivered.

On the winning toss to Massaquoi, Cleveland’s crowd erupted, but Browns fans were soon holding their breath. Massaquoi and teammate Ben Watson were penalized for excessive celebration after the TD, and Cleveland was then flagged for a horse-collar tackle on the ensuing kickoff.

Henne took over near midfield, but Miami’s QB threw three straight incompletions before he was picked by Adams on a pass intended for Brandon Marshall.

Henne knows the Dolphins must regroup quickly to salvage the season.

“It starts with believing you can win,” Henne said. “We have to put the right mental attitude out there, knowing we are going to win. If you have the right attitude, you’re more confident in yourself. We’re going to find out what kind of team this is.”

McCoy finished 19 of 39 for 210 yards and two TDs — one to Josh Cribbs, and one to Massaquoi. The Browns had to adjust their gameplan after star running back Peyton Hillis was scratched with a case of strep throat and Cribbs couldn’t return punts or kickoffs because of a groin injury.

Cleveland fans have been waiting for someone to bring the Browns back to respectability.

“It’s way too early to say I’m a hero,” McCoy said. “I’ll be the first to tell you I’ve got a lot of work to do leading this football team, and we as a team have a lot of work to do. We earned some confidence today in each other.”

Notes: Henne went 19 of 29 for 255 yards. … Browns RB Montario Hardesty started for Hillis and finished with 67 yards on 14 carries. … The Browns are 2-1 for the first time since 2002. … Dolphins G Vernon Carey injured his right shoulder in the first quarter and didn’t return. He’ll have tests Monday. … Browns K Phil Dawson moved past Don Cockroft into second place on team’s career scoring list behind Hall of Famer Lou Groza.

The Associated Press CINCINNATI (AP) — It’ll go down as the Bengals home opener that most fans didn’t want to... read more