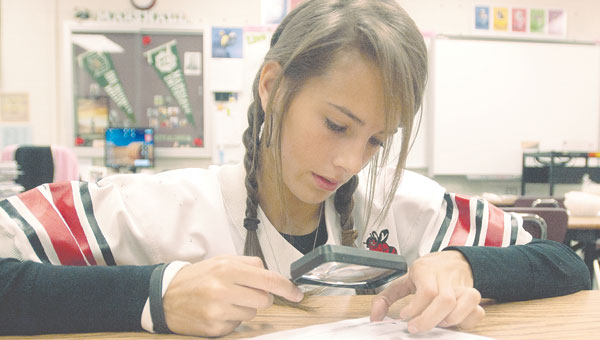 Ashley Adkins attempts to match up fingerprints during a forensic science class taught at Dawson-Bryant High School. This is the first year for this class.

This is the scenario for students in the new forensic science class at Dawson-Bryant High School.

This is the introductory year for the class, teacher Amy Ball said. Ball said students had expressed an interest in learning forensic science, and while she was at a science teachers’ conference in Nashville, Tenn., she found the perfect course pack.

Her class of seven is charged with solving the mystery of Lyle and Louise Mondelo. Louise is one of five people found dead between two separate crimes scenes. Lyle is missing and is among suspects.

“It’s pretty interesting,” Ball said. “We’re not sure who did it and we’re trying to find out.”

Friday, student investigators worked to hone their finger printing skills. As they dusted glass panes for prints, junior Ashley Adkins talked about why she was interested in the class.

“I want to become a scientist in the forensic field,” she said. “I love ‘Criminal Minds’ and ‘CSI.’”

Throughout the year, Adkins said she was looking forward to learning more about forensics, doing hands-on labs and solving the mystery of Lyle and Louise.

After dusting for prints, the students lifted the prints using adhesive hinge lifters. Using specific identifying techniques, they used print samples taken the day before to identify each other’s prints.

“How did you know that was mine?” Adkins asked when another student, Brandon Mowel matched her prints.

“I wanted them to see what it takes to get a finger print,” Ball said of the their first lab.

Each finger print is different, and even on the same hand, fingers can have varying patterns of deltas, loops, whirls and arches.

Later in the semester, she said, they would study the steps required to analyze and match DNA.

Even though this is the first year for the class, Ball said she is hoping to continue it.

“I want to get (students) excited about science,” she said. “I hope by December we’ll have some idea on what happened in the mystery of Lyle and Louise, because I don’t know. We’re doing it together.”