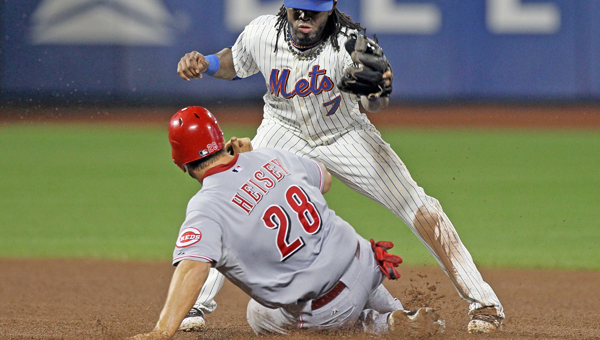 Cincinnati Reds’ Chris Heisey (28) steals second base in the fourth inning against Jose Reyes of the New York Mets at Citi Field in New York on Monday. The Reds won 6-5. (The Ironton Tribune / MCT Direct Photos)

NEW YORK — Chris Heisey never expected to be such a power threat. His defense makes a difference for Cincinnati, too.

Heisey hit a go-ahead, three-run homer just moments after his diving catch and the Reds held off the New York Mets 6-5 on Monday night in the opener of their season-ending series.

“He had a real big night for us,” manager Dusty Baker said.

Jose Reyes had three hits for the Mets to boost his bid for the NL batting title, but his baserunning blunder in the eighth inning cost them a chance to tie the game.

New York was leading 4-3 in the sixth and had two runners on when David Wright hit a two-out drive to the gap in left-center. Heisey raced over and stretched out for a splendid, backhand grab that saved two runs.

Joey Votto and Jay Bruce singled off Tim Byrdak (2-1) in the seventh before Heisey hit the first pitch from Josh Stinson over the 16-foot fence in left field. Heisey, who has 18 home runs in 271 at-bats this year, finished with three hits.

“I’m happy with that. I wouldn’t have expected it coming into the year,” Heisey said. “I never was a home run hitter until this year, really. I couldn’t really tell you why I’m hitting home runs now.”

The speedy Reyes lined an RBI double into the right-field corner to cut it to 6-5 in the eighth, a ball that he normally would turn into a triple without much trouble. But the Mets have instructed Reyes to take it easy on his legs after hamstring injuries landed him on the disabled list twice during the summer, so he cruised toward second base at half-speed and appeared caught in-between.

Perhaps expecting a throw to the plate that would allow him to take third, Reyes took a wide turn around second — much too far. The Reds threw behind him and he was easily tagged out.

Ruben Tejada followed with a single, then was caught stealing on a close play to end the inning.

“I went too far. I should have stayed there. I already was in scoring position,” Reyes said. “I don’t care about batting titles right now because we lost the game and I made a mistake running the bases and that cost us the game.”

Reyes finished 3 for 4 with a sacrifice fly and a stolen base to raise his average to .334. Milwaukee slugger Ryan Braun began the night at .333 before delivering a pinch-hit double against Pittsburgh and remaining in the game.

No member of the Mets — or Brewers, for that matter — has won a batting crown.

A sparse crowd, announced at 28,651, cheered when the big video board in center field showed that Reyes’ second hit had tied him with Braun at .333.

Collins said he might sit Reyes in the season finale Wednesday afternoon, depending on how he feels. However, Collins said the batting race could factor into his decision.

Reyes can become a free agent after the season and might be playing his final games with the Mets, who signed him when he was 16.

“Tomorrow and the next day are going to be tough for me,” he said. “I can’t let that go through my head. But like I said, I have to stay focused like always. I’m going to think about it, no doubt, but I don’t know what’s going to happen to me in the future.”

Logan Ondrusek (5-5) got one out for the win and Francisco Cordero escaped a jam in the ninth to earn his 36th save in 42 chances. After his first two batters reached safely, Cordero threw out a runner at third on a bunt and then got Josh Thole to ground into a game-ending double play.

With his 326th save, Cordero tied Roberto Hernandez for 12th place on the career list. It was his 149th for Cincinnati, breaking a tie with John Franco for second place in team history behind Danny Graves (182).

Baker signed the lineup card for Cordero and wrote a nice message on it.

“It’s amazing. Like I said before, it’s unbelievable. It shows that I’m doing my job the right way,” Cordero said. “I’ve got a lot of lineups this year because I’ve been passing a lot of people. It’s nice. I mean, every time I see a lineup in my locker it tells me that something good happened that night.”

Reds starter Homer Bailey allowed four runs and nine hits in five innings. He was tagged for 12 hits and a career-high nine runs over four-plus innings in a 10-9 loss to the Mets in late July, when New York completed a four-game sweep at Cincinnati.

NOTES: RHP Bronson Arroyo (9-12) starts Tuesday night for Cincinnati. Coming off his first complete game of the season, he needs nine innings pitched to reach 200 for the seventh straight year. … Heisey started in CF in place of Drew Stubbs, who was rested. Stubbs entered on defense in the seventh, shifting Heisey to left. Baker said Stubbs will play the final two games. … Baker was interested to hear that the Mets are considering changes to the dimensions at spacious Citi Field for next year. “I thought it was too big in the first place,” he said. … Wright was hit behind his left shoulder by a pitch from Cordero. He was shaken up but stayed in the game. … The Mets were missing their entire starting outfield because of injuries or illness. LF Jason Bay, sidelined with a sinus infection, went to the doctor for some new medication, Collins said. … The Mets are 3-10 in their last 13 home games.

The Associated Press CINCINNATI — Two more players are facing suspensions. The rookie quarterback is starting to play like one.... read more