Nice night for a cruise 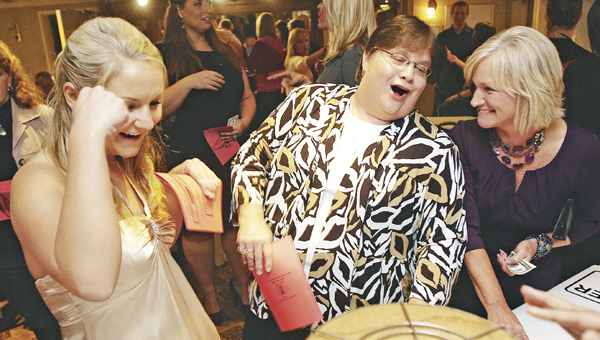 Bridgette Williams, Jodi Rowe Collins and Lisa Williams, pictured left to right, play the over under game in the casino room of the “Southern Autumn Night Rollin’ On The River” cruise on the Belle of Cincinnati sponsored by the Ironton-Lawrence County Community Action Organization.

Stormy skies dissipated for a picturesque evening for a cruise on the Ohio River.

CAO Executive Director D.R. Gossett said he was returning to the area from Point Pleasant, W.Va. and it rained all the way. He was worried the rain would continue.

First on the itinerary was a fancy buffet. Diners feasted on salad, rolls, green beans, potatoes, glazed ham and chicken with cream sauce. Apple and plain cheesecake finished off the meal.

After dinner the mood became more festive. The Fugitives took the stage. The band had a lead singer, two bass guitarists and piano/keyboard player. Couples danced to ‘60s hits such as “I’m a Believer,” “As Tears Go By” and “Brown Eyed Girl”.

First-timer Ruby Patrick from Ashland, Ky. came with a friend.

“I’m enjoying myself,” she said.

Don and Peggy Hamilton have been coming on the cruise since the inception four years ago.

“I like the entertainment, the people and it’s fun,” Peggy Hamilton said.

The third floor featured casino entertainment. Guests were given $25,000 in play money to use in games such as blackjack, roulette and craps. Slot machines were also available. For every $25,000 left at the end of the night, guests could redeem a ticket to win prizes. This year’s assortment included two Marshall University football gift packages, a wine and cheese basket, a Nikon Cool Pix camera, a Kindle with 3G and Wi-Fi, three $100 Kroger gift cards and a $100 Lowes gift card.

“Casinos are popular because either you’ve been to Las Vegas or like card games,” said Joe Eddins of Media Promotions Entertainment, a Huntington, W.Va. firm that provided the card dealers and slot machines. ‘It’s all for fun and it’s not real money. People can come and enjoy it.”

The event caters to Ironton’s culture.

“(Ironton’s) a river community and to celebrate the river makes sense,” Gossett said.

Proceeds from the cruise to go the CAO to fund its endeavors. Gossett named the senior division of the organization as lacking in funding. He said it’s likely the proceeds will go to that. The CAO sponsors programs like Meals on Wheels and gives medical help for those in need.

“We have an unmet need in that program,” he said. “We want to expand but we can’t right now.”

Ironton Police are asking for anyone with any information about a Saturday armed robbery to contact the department. At 1:40... read more