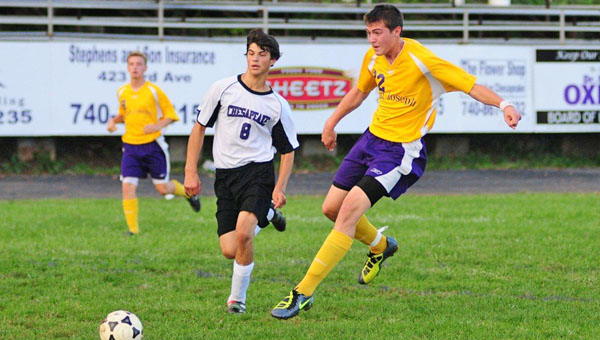 St. Joseph Flyers’ Eli Lewis (22) lines up a shot at the goal as he scores one of his three goals in Tuesday’s 5-1 win over Chesapeake in a soccer game. (The Ironton Tribune / Kent Sanborn of Southern Ohio Sports Photos)

CHESAPEAKE — The St. Joseph Flyers learned that it’s not how you start but how you finish.

St. Joseph led just 1-0 until late in the half before pulling ahead 3-1. The Flyers played better overall in the second half as they beat the Chesapeake Panthers 5-1 on Tuesday in a soccer game.

“It took us a half to get started, but the team picked it up in the second half,” said Flyers’ coach Dan Blair.

St. Joseph got a hat trick for the second straight game. This time Eli Lewis scored three goals to go along with an assist.

Joseph Payton and Eli Lutz scored a goal each while Trey Young contributed an assist for St. Joseph.

ATLANTA (AP) — The Atlanta Braves are doing their best to give away what looked like a certain playoff berth... read more