Buckeyes at crossroads vs. Spartans 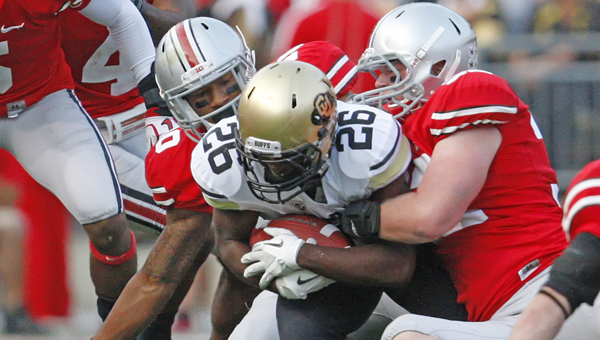 COLUMBUS — Long before the season started, a lot of people said they would hold off judgment on Ohio State until the Buckeyes had all their personnel back after the first five games.

That means a lot is riding on Saturday’s Big Ten opener against Michigan State.

“There’s definitely a heightened awareness,” interim coach Luke Fickell said. “(The players) understand that. Not that those other games don’t count because they do. They know what it’s about. That’s what our focus has always been about. This is when it starts.”

Suspensions, injuries, departures, a lack of depth and integrating in several freshmen have all added up to a mixed bag for the Buckeyes (3-1). To knock off a talented Spartans (3-1) team would mean they’re headed in the right direction.

“(The interest will) definitely be raised going into Big Ten play,” tailback Jordan Hall said. “(Michigan State is) a good, physical team. It’ll be a good test for us. We’ll need a good week of practice.”

Fickell is pleased with where his team is so far, but also realizes that it has a lot of work to do. A setback this week at Ohio Stadium could mean trouble for a fragile team heading into a tornado of a four-game set to open conference play.

The Michigan State game kicks off a four-game boxed set of conference games that couldn’t be much more difficult. After the Spartans, Ohio State hits the road to play No. 8 Nebraska and then No. 24 Illinois. After a bye week, the Buckeyes host No. 7 Wisconsin.

It’s hard to not look ahead at the murderer’s row — as Ohio State President Gordon Gee once described a typical Big Ten schedule — in the coming weeks.

At the same time, the Buckeyes are aware of the difficulty of the task.

The game takes on vital importance to Michigan State, as well. The Spartans also need a good start to a schedule just as grueling if not more so than Ohio State’s. They follow Saturday’s road game with home games against No. 19 Michigan and No. 7 Wisconsin before traveling to No. 8 Nebraska.

“I think the Big Ten season tends to define you,” Michigan State coach Mark Dantonio said. “I know we can win in (Spartan) Stadium. We’ve got to win on the road in order for this football season to be a success ultimately, total success, what everybody wants. We’ve got to go and win on the road. That’s just a fact. This is the next one up, and we’ll be motivated.”

Ohio State will be without three offensive starters (and one backup on defense) for the Michigan State game, their last of a five-game NCAA suspension for accepting cash and free tattoos. In addition, it may also be without two other starters — defensive tackle Nathan Williams (arthroscopic knee surgery) and wide receiver Corey “Philly” Brown (high ankle sprain) — who have missed the last two games. Fickell said he wouldn’t know until later in the week if either would be available for the game against the Spartans.

In the meantime, the Buckeyes are hoping to not take another step backward.

To keep making progress, they need to the continued maturation of freshman quarterback Braxton Miller, and for the veterans on both sides of the ball to hold the fort until the reinforcements arrive.

In his first collegiate start after taking over for Joe Bauserman, Miller completed just 5 of 13 passes for 83 yards, plus matched that yardage total on the ground on 17 carries. He tossed two touchdown passes, both to fellow freshman Devin Smith, and avoided any turnovers — the first time he’s not lost a fumble or thrown an interception in a college game.

“He’s like a freshman. He’s doing a better job,” Fickell said. “The more you become involved in doing it, obviously you start to learn a little bit better. I think he’s done a good job. He’s going to continue to do a good job. It’s on us to make sure we can only put the things in his hands that we think he can handle. How much that is, we’ll continue to (find out).”