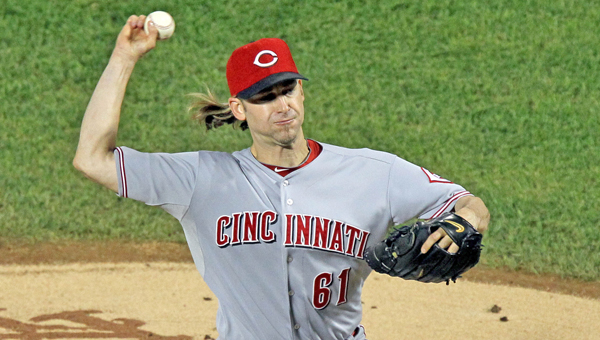 Cincinnati Reds’ pitcher Bronson Arroyo began the season with mononucleosis. It was just the start of many problems the team experienced during the season. (The Ironton Tribune / MCT Direct Photos)

CINCINNATI (AP) — Johnny Cueto came down with a bum shoulder. So did Homer Bailey. Bronson Arroyo was tested for something called valley fever and was diagnosed with mononucleosis instead.

And that was only spring training.

The hits kept coming for the Cincinnati Reds, who didn’t make much of a stand while trying to defend their NL Central title.

“If our year’s been a road, it’s been a foggy road,” manager Dusty Baker said. “Waiting for the sun to burn it off, it never did.”

The fog rolled in shortly after the 91-win team was bumped from the playoffs, no-hit and swept by the Philadelphia Phillies. They spent more than $150 million in the offseason on contract extensions for Cueto, Arroyo, Joey Votto and Jay Bruce. The tried to patch over problems at shortstop and left field.

General manager Walt Jocketty thought that by keeping the core of a playoff team intact, it would be set up for another title run. His biggest moves backfired, and the Reds finished in third place at 79-83 — their 10th losing season in the last 11 years.

There are significant decisions coming off that 83-loss wake-up call.

“This is going to be a strange offseason, I think,” Arroyo said. “I don’t think anyone in the clubhouse right here has any idea of the moves the front office wants to make. They have a lot on their plate and I don’t know what direction they are going in. Are they are going to keep it young and keep the core guys and add a couple of pieces? Or will they make drastic trades and trade some of the prospects to acquire other guys?”

In some ways, they’re stuck in the same place as a year ago.

Fresh off their first playoff appearance in 15 years, the Reds seemed flush with offense and young pitching. The problems areas were shortstop, left field and third base, where Scott Rolen was having problems with his back and neck.

They replaced shortstop Orlando Cabrera with Edgar Renteria and let him share the job with Paul Janish. Both struggled mightily. They kept Jonny Gomes in left field and brought in Fred Lewis to share the spot, a move that backfired, too. Rolen’s body gave out again — he played in only 65 games, batted .242, hit five homers and had shoulder surgery.

As a result, the Reds took a giant step back at three of the eight everyday positions.

Votto followed his National League MVP season with another impressive one, leading the league in doubles, walks, on-base percentage and batting with runners in scoring position. Bruce had an up-and-down season, finishing with 32 homers and 97 RBIs and a .256 average. Drew Stubbs eventually lost his leadoff spot in the order because of his propensity to strike out and ended up fanning 205 times, most in the majors.

The pitching was the biggest problem.

The rotation was in flux throughout the season because of injuries and Edinson Volquez’s struggles. Arroyo never fully recovered from the mono and gave up a club-record 46 homers while going 9-12. Once healthy, Cueto went 9-5 with a 2.31 ERA. Mike Leake also was dependable in his second pro season, going 12-9 with a 3.86 ERA.

The others were inconsistent or worse. The Reds’ pitching staff finished 12th in the league with a 4.16 ERA and gave up 185 homers, second-most in the league.

So, where do they go from here?

Rolen turns 37 on April 4. He didn’t play after surgery to clean out his left shoulder on Aug. 3. He’s got one year left on his contract at $6.5 million.

“I like the responsibility of taking my position,” Rolen said. “That’s what I feel grossly short of this year. When I was out there, I didn’t contribute the way I wanted to.

Left field is still a question — do the Reds give it to one of their young players, or try to bring in yet another veteran? Rookie shortstop Zack Cozart played well after a midseason promotion, but needed reconstructive surgery on his left (non-throwing) elbow after a collision at second base.

The Reds also have to sort out the pitching staff and could be in the market to acquire a starter. They have to decide whether to move left-hander Aroldis Chapman back into a starter’s role after a year and a half in the bullpen.

There are money issues, too. Closer Francisco Cordero had a solid season with 37 saves. The Reds have an option to keep him, but it’s pricey — $12 million. They also have a $12 million option on second baseman Brandon Phillips, who would like a long-term deal rather than the one-year commitment.

“That’s like if you rent a house for a year,” Phillips said. “That’s not going to work. I am very content with them picking up my option, if they do, but this is my career. I want an extension. I want to stay here for the rest of my career.”

“It’s definitely going to be an interesting offseason to watch,” Arroyo said.

By JIM WALKER Tribune Sports Editor The St. Joseph Flyers may not have taken advantage of all their scoring opportunities,... read more