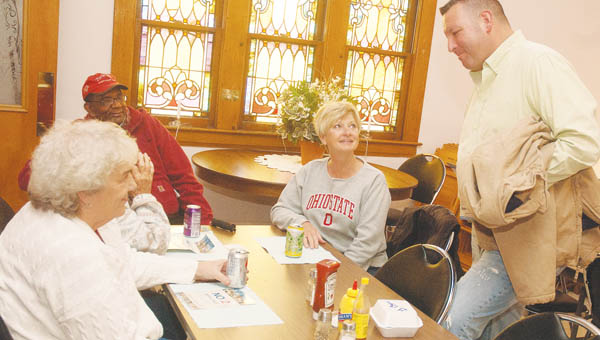 Aaron Bollinger speaks with eventgoers during the Quinn Chapel A.M.E. Church Meet the Candidates Fish Fry Saturday. Bollinger, who is running for Ironton City Council, was one of five candidates who attended the event.

Fish fries at Quinn Chapel AME Church are a community standard that happens at least twice a year. Proceeds from the dinners go toward a variety of programs the church supports including a food pantry.

But on Saturday the church decided to do a variation of the theme when a “Meet the Candidates” feature was added to the event.

Between 1 and 2 p.m. all candidates running for office were invited to the dinner at the church’s parish hall where they could meet with their constituents or potential constituents.

“This is election time and I wanted the candidates to know the people of the community,” Pastor James H. Stowe Jr., said. “We are willing to listen, willing to hear.”

Stowe, who took over the reins of the church in November 2009, wanted those seeking public office to know that the church wants to see the advancement of Ironton, he said.

“We will hold people accountable,” he said. “There is a commitment between the downtown and the community.”

Abuse happens but there is help

— A woman told authorities she turned down her husband’s sexual advance and he responded by punching her in the... read more