Walking for a cure 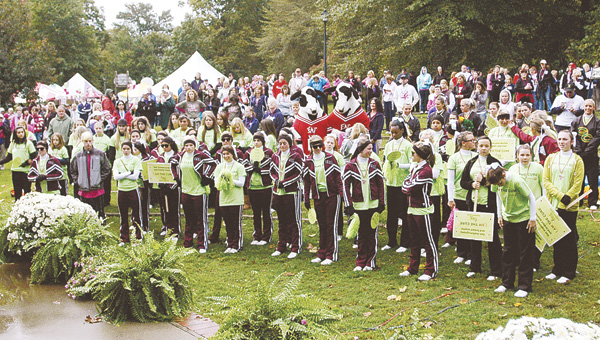 The Lexington chapter of the Susan G. Komen Foundation hosted a I AM THE CURE walk in Ashland, Ky.’s Central Park Saturday. Registration started around 7 a.m. with the walk following at 9 a.m.

The three pillars of the event were fundraising, education and survivor recognition Jane Blankenship, executive director of the King’s Daughters Health Foundation, said in a press release. Citizens could make a donation, form a walking team, join an existing team or serve as a volunteer.

The fundraising goal was $80,000. The goal of participants was 500 and the event had 560 walkers. 75 percent of the money will stay in eastern and central Kentucky for screenings and patient education.

Lopez said the standard recommendation age for getting mammograms is 40. If an individual has a family history of breast cancer, the age is lowered to 35. He also said since 1990 the survivor rate has increased by three percent each year.

The event also set aside special things for the survivors. A VIPink tent sponsored by Chic-fil-A provided breakfast to a survivor and their guest. They also had a tent with goodies just for them.

Gail Hunter of Kenova, W.Va. walked for her family and possible families who could be affected. She was 34 years old at time of diagnosis and had small children. She worried how it would affect them. Still, she stayed upbeat.

Hunter is now nine years cancer-free. She said awareness is needed because diagnosis is drifting into younger ages and it affects families.

Fifteen minutes before the walk, Gina from the Ashland YMCA lead the crowd in Zumba moves to warm up.

Next Teresa Daniels, who was celebrating her third anniversary as a cancer survivor, came on stage to lead in prayer and the Pledge of Allegiance.

As the walkers began, a sunbeam peaked through the clouds while the Adelines sang “You’ll Never Walk Alone” by Elvis Presley.