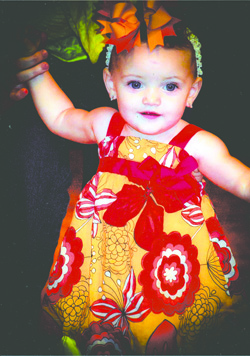 Cassidy is 11 months old at the Miss Honey Bee pageant at the Life Community Center in Portsmouth July 30. Photo by Heather Marie Photography

Cassidy McComas, a curly haired and active one-year-old from South Point, Ohio has been surrounded by uncertainty since birth. An elusive illness couldn’t be identified and a young mother, Sonya, was left to fight the battle alone.

It started at 2 weeks old. The child cried for three hours a day, four days a week. Doctors said she was colic, a condition where babies cry for hours on end without any explanation. Sonya was told she would grow out of it.

The condition didn’t cease. At 3 months old, Cassidy was given a special formula for colic babies. When that didn’t help, Sonya knew she had to take more drastic measures.

“I told the doctor, this is not colic. She would have grown out of it by now,” Sonya said. “She sounds like she’s being stabbed.”

This past summer, Cassidy and Sonya journeyed to Nationwide Children’s Hospital to seek definitive answers. A preparatory X-Ray found the first 1/3 of Cassidy’s intestines inflamed. Dr. John Russo, a gastroenterologist Cassidy had been referred to, then performed a colonoscopy and endoscopy.

When the results came in, they were indecisive. However possibilities could be narrowed down to two. The first is telescoping intestines, when the intestines wraps around and pierce the other. The other is ulcerative colitis, which affects intestinal lining. Dr. Russo said Cassidy most likely has ulcerative colitis but can’t do a decisive stool test because of all the antibiotics in her system to keep her well.

The ordeal has brought light to different aspects of Sonya’s life.

“You find out who your friends are,” Sonya said. “It’s brought my family closer together.”

It’s not all stressful doctors’ visits for the McComas’. Cassidy participates in pageants around the region. So far she has been in 11 with plans for more.

“I wanted to enter her in pageants when she was a few weeks old but Mom talked me out of it,” Sonya said.

“When she’s old enough I’ll ask her if she wants to do them,” she said. “I’m not sure if we will do it all her life. I want her in other things too like sports.”

Cassidy is competing in the Kentucky State Pageant next May. Each constant has to sell ads to be shown in the pageant’s brochure.

Ohio State running back Carlos Hyde (34) carries the ball up field against Michigan State in the second half at... read more