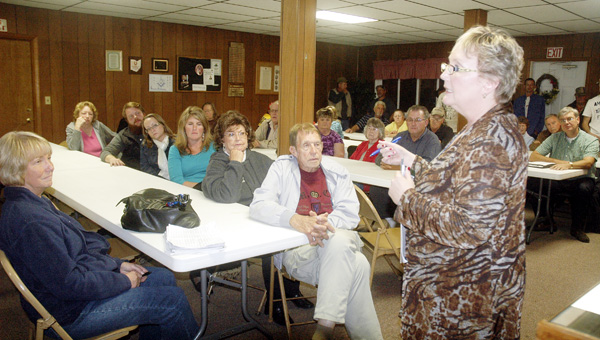 WATERLOO — For many if not most rural residents, the post office is a staple of the local landscape and the mail carrier is not just a government employee but also a friend.

But five area post offices are under the microscope for potential closing. Last night postal service officials met with Waterloo residents who told them their post office is more than just a building, it is a necessary link to the rest of Lawrence County and the world.

Ross Criego, post office review coordinator, told the roughly 75 people who attended the meeting at the Waterloo Masonic Lodge that the post office has yet to make any decision on its proposal. Right now the matter is in a comment and information-collecting phase.

Officials are looking for reasons why they should not close targetted facilities, given that the postal service is $9.2 billion in the red, has been in financial trouble for a couple of years and mail volume is falling.

“In 60 days we’re out of cash; we can’t make payroll,” Criego said. “… There’s no way to continue operations and pay the bills.”

Criego said those who will decide the fate of these post offices will consider mail volume — how much mail actually goes through the facility and a less than two-hour-a-day workload.

State Rep. John Carey pointed out many rural Lawrence County post offices are at a disadvantage to start with: A vast portion of interior Lawrence County is owned by the Wayne National Forest.

Several people pointed out that rural residents often have very poor access to the Internet, therefore, arranging for postal delivery online in place of a post office trip is not always possible. Former postmaster Ardella Belville pointed out that many rural residents use the post office as a bank, buying money orders to pay bills, for instance; other customers do not get home delivery because they do not live on a rural route and must come to the post office to pick up their mail.

“Then you are disadvantaged citizens,” Criego said. “These are the things they (postal officials) need to know.”

Lawrence County Commissioner Bill Pratt pointed out that given the circumstances of rural life, he doubted mail volume has changed much over the years in rural Lawrence County; while mail volume may have dropped substantially in other areas because of telephones and the Internet, people in rural areas still use the tried and true mail delivery.

“To me it seems like they want to dismantle a fundamental way of life in rural America,” he said.

Former mail carrier John K. Thomas pointed out some rural residents depend on the mail system for something of vital importance.

“We have veterans whose medication can only be shipped by the postal service,” he said. And he pointed out another fact, too: If the postal service is losing money and operating in the red, it may have been from gross mismanagement.

“They overpaid by putting $75 million too much in the retirement and health care fund,” Thomas said. “They were in the black until all of this.”

After the 60-day comment period, the information will be compiled and sent to the manager of postal operations, which can either stop the process and keep the post offices open or forward the plan to an area office of the postal service, which would then have the task of turning thumbs up or down. The final decision would be made at the federal headquarters.

Beside Waterloo, the other local offices on the list are Scottown, Rock Camp, Willow Wood and Haverhll.