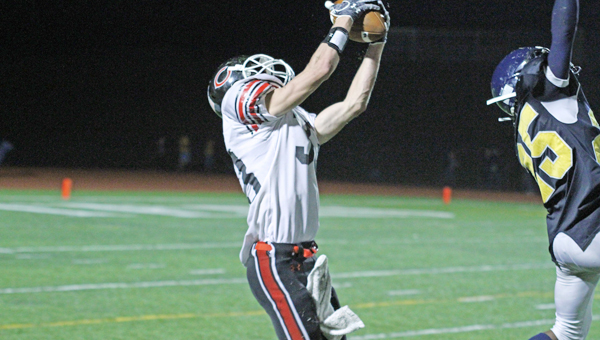 Coal Grove Hornets’ receiver Bryan Steele hauls in a touchdown pass as he gets behind a South Point defender. The Hornets won 48-6 and play rival Rock Hill on Friday. (The Ironton Tribune / Courtesy of Joe Stephens of FJS Photos.com)

There are more similarities between the Coal Grove Hornets and Rock Hill Redmen beyond their dislike for each other in this rivalry game.

The two teams are similar in how they match up position by position even though the Hornets come into the game 2-3 overall and 1-0 in the Ohio Valley Conference while Rock Hill is 1-5 and 0-1.

“They’re a very athletic team. They can hurt you in a lot of ways,” said Hornets’ coach Dave Lucas.

“They have an offensive line that does a good job getting into you, they’re running that trap scheme, the fullback is a big, physical kid, the halfbacks have speed and the quarterback is a duel threat,” said Knipp.

The Hornets have a top linebacker in Greg Bender, the Redmen have Shane Harper — provided he’s healthy. And both double as the fullback.

However, there is a different at the linebacker position. Bender has Kyle Estep and Eric Fields as his running mates while Harper has missed the last four weeks and may not return until next week.

“Defensively, (Coal Grove) is playing very aggressively. They fly to the football and gang tackle,” said Knipp. “When the ball is in the air, they defend the pass well.”

Each team has a quarterback who can run and throw, Rock Hill with Will McCollister and Coal Grove with Alex Bare.

The Hornets have halfbacks Estep, Jordan Beals and Isaiah Gunther

The Redmen rely on Jared Bruce and Jesse Lane. Trey Wilds is the top receiver for the Redmen and Bryan Steele leads the Hornets receiving corps.

“They’re throwing the ball more and Bare has a bunch of athletic kids on the perimeter who can get down the field. Bare does a good job running the offense and he makes them go with his feet and arm,” said Knipp.

With so many similar skilled players, this game may be decided by the offensive and defensive lines.

“Rock Hill always has some size up front and they’re kids are always strong and physical,” said Lucas.

Coal Grove is also known for big, strong and physical linemen. Knipp said the Hornets are not as big as in the past but their linemen are more athletic.

“They’re not as big as they have been in the past, but they’re a solid team and they do a good job getting on people,” said Knipp.

By JIM WALKER Tribune Sports Editor Sciotoville East at Symmes Valley This could become a shootout. So far this season... read more