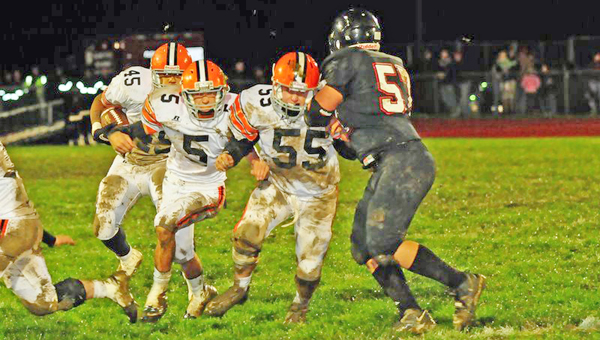 The Ironton Fighting Tigers’ football schedule is like watching a downpour. You keep asking the question, “Is it ever going to let up?”

After road games at Ashland, Gallipolis and Jonathan Alder, Ironton gets to come home but they must face the unbeaten Jackson Ironmen who have allowed just 55 points while posting three shutouts.

“We’ve played some tough teams and you can add Jackson to that list,” said Ironton coach Bob Lutz. “They’ve got a very big, aggressive line and some good athletes at the skill positions.”

“Their quarterback has a good arm and he’s a good athlete. He’s a threat to run in any situation,” said Lutz.

“(McNelly) might be their best athlete. He’s a good receiver and he’s tough to bring down in the open field,” said Lutz.

The tight end is Reagan Williams (6-2, 215) who can block or catch a pass well despite being just a freshman.

The defense is led by veteran linebackers Morgan Landrum (5-11, 210) and Jeffers along with Ervin at defensive end.

“Defensively they are a lot like they are on offense. They’re aggressive and they come at you hard,” said Lutz.

Also back is placekicker Luke Eisnaugle who is 36 of 36 on extra points.

By JIM WALKER Tribune Sports Editor CIRCLEVILLE — There was nothing normal about the entire day for Josh Zornes. The... read more