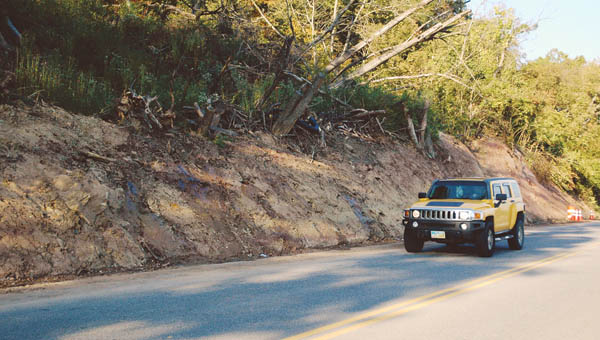 A vehicle travels Rockwood Avenue, in Chesapeake, passing the area where a retaining wall will be built come early next year.

CHESAPEAKE — The on-going slip on Rockwood Avenue may be closer to a permanent fix as the Ohio Department of Transportation begins to firm up a repair timetable.

For more than a year the village of Chesapeake has struggled with keeping that section of Rockwood opened with the hillside continuing to slip down onto the roadway.

In March Mayor Dick Gilpin approached ODOT to see if a cooperative effort between it and the village could relieve the situation.

Now after ODOT has declared the situation an emergency, the project could go out to bid by the end of the year.

“We could sell it in November to December,” Kathleen Fuller, ODOT public information officer for District 9, said. “We don’t have the plans done. We could be filing the plans within the next week or so.”

Right now ODOT engineers are teaming up with an outside consultant to fine tune plans.

“A retaining wall will be built into the hillside,” Fuller said. “We won’t see any real construction until the first of next year, early next year. Possibly in January, it could go to construction or early February, if we are not getting into a lot of rain or snow or frigid temperatures. It depends on what the weather does. It is possible to get construction done early next year.”

For a short period of time this spring one lane of the avenue was shut down so ODOT crews could clean off the dirt. AEP removed a power line from the area that powered a streetlight. And the phone company cut trees slipping down the hill that were pressing against their lines.

Until construction begins ODOT crews plan to keep the area under surveillance for possible blockages.

“We have our employees who go through the area from the garage on a regular basis and do a general inspection and inventory,” Fuller said. “This particular area is a watch area. If the village calls we will respond or if we see something we respond.”