Buckeyes know first trip to Nebraska will be loud 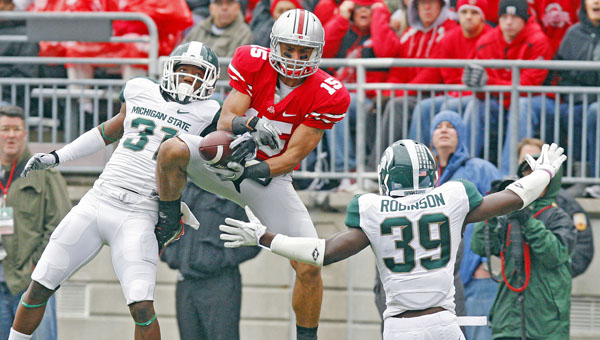 COLUMBUS (AP) — When Ohio State makes its first trip ever to play No. 14 Nebraska on Saturday, it’ll be stepping into the void.

Almost no Buckeye — player or coach — has ever been involved in a game against the Cornhuskers.

About the only person who has ever had any contact with Nebraska is defensive co-coordinator Paul Haynes, who was an assistant coach at Michigan State when the Spartans took on the Cornhuskers in the 2003 Alamo Bowl.

The Buckeyes will be trying to avoid hearing a lot of that on Saturday — but they undoubtedly will. Nebraska fans are known as loud and rambunctious, but also respectful and knowledgeable. The game will be the first Big Ten home game ever for the Cornhuskers (4-1, 0-1).

“From what I understand, they’re pretty jacked up every game,” Buckeyes interim coach Luke Fickell said. “It’s a night game, so that throws a lot into it, too.”

Nebraska followers are among the most fervent in the sport. No wonder that every entrance at Memorial Stadium has a sign which reads, “Through these gates pass the Greatest Fans in College Football.”

Since no Ohio State (3-2, 0-1) player has ever played against Nebraska, about all they know is the anecdotal information they’ve picked up from watching the Cornhuskers’ games on TV or from talking to friends who have made the trip.

“It’ll be a hostile environment,” linebacker Andrew Sweat said. “Obviously, I’ve never been there but I’ve heard a lot about it. I assume it’s comparable to Wisconsin, Penn State, some of those venues. So, we’ll be ready for it.”

For some members of the Ohio State traveling party, it’s been a goal to one day stand on the sidelines in Memorial Stadium.

Running backs coach Dick Tressel is in his 29th year in the profession. In a long career that has included visits to stadiums and cities all over the country, he’s looking forward to seeing one of the cathedrals of college football up close.

“Just today I was thinking about that,” Tressel said. “This will be a neat experience. Another opportunity that you haven’t had.”

Clouding the issue for the Buckeyes is that they’ve lost their only road game so far this year — a dismal 24-6 loss at Miami three weeks ago. They are also coming off an anemic offensive performance in a 10-7 loss to Michigan State top open Big Ten play.

Still, making the school’s first trip to Nebraska is also a big deal for Ohio State.

“It’s huge not just for us as a team, but also for our entire school, our fan base,” Fickell said. “This is something new. New things are obviously exciting. I’m not sure that our guys know a whole bunch about that because it still comes down to what they do on the football field. But a new atmosphere, a new stadium, all of those kinds of things are things they’re excited about.”

Ohio State is rarely a decided underdog, no matter who it is playing or where. But the oddsmakers have established the Cornhuskers as an 11-point favorite.

“Underdog, overdog, whatever the projection is — that’s other people’s opinions,” Sweat said. “All we can control is going out and playing hard and having a great game plan and executing it. That will take care of itself.”

Visiting Memorial Stadium is just another highlight to put in the scrapbook, another spot to say you’ve visited. And that’s even before the game unfolds.

“This is one of the reasons why it’s fortunate that they are in the Big Ten now because this is what you sign up for,” Haynes said. “Our guys are excited about going there, because they know it’s going to be a great atmosphere. I’m excited too. This is one of the core places. To have an opportunity to go and play there is awesome.”

Tigers hold on to eliminate Yankees

NEW YORK (AP) — The Detroit Tigers survived a tense trip back to Bronx, with Jose Valverde and the bullpen... read more