Domestic violence event offers glimpse into life of those with problem 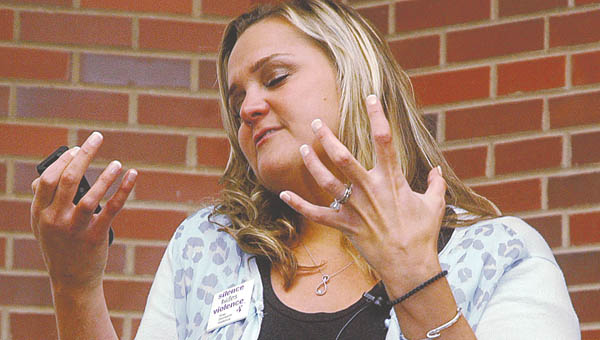 “Why did I made the decision to leave,” says guest speaker Nikki Eplion Bryant as she speaks to eventgoers during the Third Annual Domestic Violence Awareness Program Thursday evening at Ohio University Southern. Nikki talked about the years of abuse she endured and how she escaped.

The statistics are sobering: 1.3 million women in the United States are victims of domestic violence each year.

Thursday night, those who gathered at Ohio University Southern heard from survivors of domestic violence.

Nikki Eplion Bryant told the audience she escaped from an abusive relationship with two small children and, through hard work and determination, was able to go from victim to victor.

Bryant described an abuser who was smart and manipulative and used emotional and mental abuse to control and damage.

“It takes time to work your way in, work on a person’s vulnerabilities and then they work on every aspect of your life,” she said. And slowly but surely, she was under the control of man who loved being in control for all the wrong reasons.

Bryant described how her abuser did everything he could to derail any plans she had for self improvement, from driving off in her car when she needed it to throwing away her clothes.

When he abused her physically she would call the police but he rarely stayed in jail for long.

When Bryant realized she couldn’t live in this situation any longer, she began making a plan to take her children and escape. She said she was thankful for the help from then-domestic violence center director Ruthanne Delong.

“She brought me out of that hole,” Bryant said of Delong. And on her road to recovery, Bryant said Delong reminded her that her abusive situation did not define Bryant as a person, it was what she did as a response to it that defined her.

Although her journey from victim to survivor was long and often challenging — she spent three months at the Lawrence County Domestic Violence Shelter — she is now an associate professor at Ashland Community and Technical College and is working on a master’s degree. She has remarried, happily, and the kids are fine.

Judy Martinez Honican told the audience she, too, was a domestic abuse survivor. The Ironton native who now lives in Owensboro, Ky., told how she grew up in an abusive situation, so when she married an abusive man she thought this was the way relationships were supposed to be.

She said she sunk into drug abuse to escape the pain she suffered during her 13-year relationship. She said she left her abuser several times but he always found where she was hiding and would threaten her if she did not come back to him.

Also during the evening, Elaine Payne, director of the domestic violence task force, read a poem written by a survivor about abuse.

It was the dog’s fault. That was the defense strategy of a Mason Township man accused of firing a gun... read more