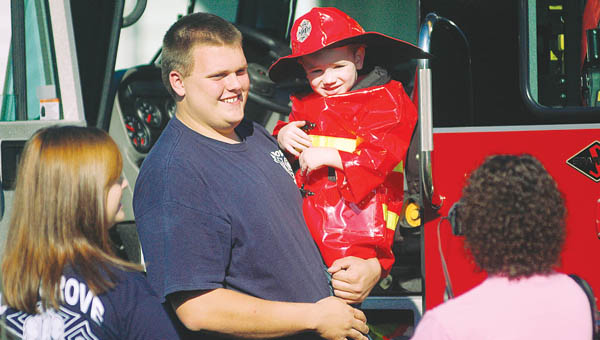 COAL GROVE — Four-year-old Brayden Runyon looked every bit the part of a polished, professional firefighter Saturday morning, never mind his youthful stature. His red firefighter’s hat was in place, along with his tot-sized turnout gear.

“He was so excited,” his mother, Susie Runyon said. Runyon’s father, Gleo is on the Coal Grove Police Department and a family friend, Travis Sherman, is a fire fighter, so it was only natural that young Brayden would find the annual Coal Grove Safety Day a fascinating event.

Safety Day began with a parade of fire engines, ambulances and police cars streaming through the village. After the parade, emergency services personnel gathered at the Dawson-Bryant Schools office field area to demonstrate their vehicles and equipment. Children like Brayden could even compete in an obstacle course and bounce around on inflatables.

There was also free food, live music and information about safety. It was also a chance for the public to show support for those who risk their lives every day to keep others safe.

Janet Johnson came with her family to safety day. Her son, Nathan Johnson is an Upper Township firefighter.

“I think today is to make the public aware of the wonderful job our emergency services do,” she said. “We’re out supporting them.”

Approximately 500 works of art, in seven different categories, will be on display this weekend at the 30th Annual Foothills... read more